The VoLPHAU is a ZAFT multipurpose large transport plane. It appears in the Mobile Suit Gundam SEED series.

The VoLPHAU is an large All-Purpose Atmospheric Transport Aircraft created by ZAFT to transport mobile suits and supplies across Earth. The aircraft is equipped with four large jet fans, two on each side, and four thruster engines at the rear.

The VoLPHAU has a hangar big enough to carry four mobile suits, and can either load them up or deploy them from the two hangar doors at the from and back of the aircraft.

The VoLPHAU is armed with six Anti-Aircraft Guns, used only for defense against enemy air units, as it isn’t meant to participate in direct combat. Instead, it’s meant to deploy its mobile suits to the battlefield and withdraw immediately afterwards.

VoLPHAUs were used to transport mobile suits and supplies across the Earth from ZAFT bases to the front lines on the battlefield. In C.E. 73, VoLPHAUs are deployed all across Earth once more, but this time it is to provide emergency assistance to areas devastated by the Junius Seven colony drop.

Unloading at Carpentaria Base 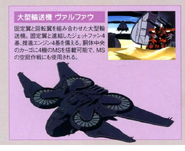