Visch Donahue(ヴィッシュ・ドナヒュー), popularly known as the Thunderclap in the Wilderness, was an officer of the Principality of Zeon and group leader of the Zeon forces stationed at Australia during the One Year War. He appears in the Mobile Suit Gundam Side Story 0079: Rise From The Ashes video game.

An ace mobile suit pilot and instructor who served on the Australian front under commander Walter Curtis, it was said that Donahue was able to "fight twice as long and destroy three times the enemy as any team member". Donahue was a skilled military strategist who was always active on the front-line, and was respected by his troops, as well as his enemies. He was also regarded as a sympathetic and flexible officer. An example of this was when he and his forces engaged the Earth Federation forces attempting to retake Alice Springs while minimizing damage to the city as much as possible. Donahue developed a rivalry with Master Pierce Rayer, captain of the White Dingo Team. On January 1 U.C. 0080, three hours before the peace agreement, Donahue was last deployed on a sortie to protect the H.L.V.'s carrying the last remaining withdrawing Zeon forces at Hughenden Fortress. Visch Donahue was killed in a final confrontation by his rival Pierce Rayer, on January 2 U.C. 0080. 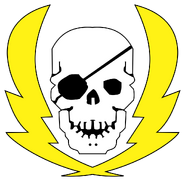 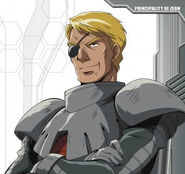