Vino is an engineer and thus he wears his engineering outfit all the time. Vino is well recoginized by his trade mark hair style where he has brown hair with a red patch at the front.

Vino appears to be a fun loving young boy who wishes to do his part in the Plants war effort. Vino is very friendly and loves to joke around he also appears to be very fond of Lacus Clyne.

Throughout the series Vino does his part in helping repair damaged mobile suits that belong to the LHM-BB01 Minerva. In the last episode the Minerva is damaged and sent crashing in the moon. The Minerva's Captain Talia Gladys then tells the crew that they will cease combat operations before she leaves. Like the rest of the crew of the LHM-BB01 Minerva Vino is then forced into being a spectator to the unfolding events. His best friend is Yolan Kent. 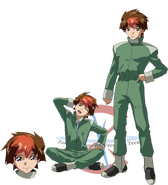 Gundam SEED Destiny Character Sheet
Add a photo to this gallery
Retrieved from "https://gundam.fandom.com/wiki/Vino_Dupre?oldid=422647"
Community content is available under CC-BY-SA unless otherwise noted.