During the Battle of A Baoa Qu, he led a team to retrieve three incomplete Zeong units, securing psycommu devices for the Federation.[1]

At some point after the One Year War, he was appointed to be the Captain of the Pegasus-class assault carrier Spartan, with the rank of Captain. Under the command of Monica Humphrey, he participated the top-secret Operation Thunderbolt.[1][2] 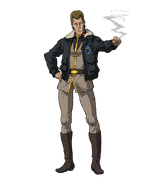 Add a photo to this gallery
Retrieved from "https://gundam.fandom.com/wiki/Vincent_Pike?oldid=461489"
Community content is available under CC-BY-SA unless otherwise noted.