Vayeate is a character in Superior Defender Gundam Force.

Known as the Knight of Storm, Vayeate had the ability to create and control wind (normally in the form of cyclones) using the fans on his back and his staff. He could fly like his brother Mercurius and worked very well with him. Before the series began, Vayeate and Mercurius fought alongside Tallgeese in his first attack on Lacroa. Unfortunately, the Knight Gundams counter-attacked, and in the end sealed Vayeate and Mercurius within rocks at the bottom of the Dark Hole. When Captain Gundam and Bakunetsumaru were trapped within the Dark Hole, they found the imprisoned Knights of Storm and Thunder. Sometime after his first defeat by the Gundam Force, Griffin Tallgeese found Vayeate and Mercurius and freed them from their prisons. Vayeate and his brother followed Tallgeese to Neotopia in his plan to exact revenge on the Gundam Force and retrieve the Spirit Egg.

In the ensuring battle, Tallgeese trapped himself, his minions, the Gundam Force, and Fenn inside a magic square of darkness. Vayeate and his brother were able to easily overpower Captain and Bakunetsumaru, but were powerless against Zero after he merged with the Feather Dragon. In the end, Vayeate, his brother, and Tallgeese fell through a crack in the magic square and ended up in the Minov Boundary Sea. Tallgeese was rendered comatose from his battle, so Vayeate and his brother tried to revive him by transferring their magical energies into their master. A long time later, Vayeate and his brother were knocked away from Tallgeese by the evil sword Epyon, which revived Tallgeese. When Tallgeese took the sword, the spirit within quickly started to overpower Tallgeese's mind, causing him to stab Vayeate, absorbing his body and mana. This gave Tallgeese the ability to use Vayeate's power of wind which Tallgeese used in his final battle with the Gundam Force. When Tallgeese was possessed by the evil spirit within the sword and turned into the Berserker Epyon, the right head of Epyon's wyvern form was able to "breathe" cyclones from its mouth.

Vayeate had a pair of fans on his back which he use to create his cyclones. He also had a staff. When Tallgeese stabbed Vayeate with the evil sword Epyon, the fans on Vayeate's back, his staff, along with the rest of his body, were absorbed into the sword. 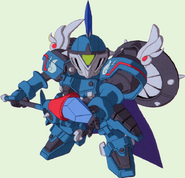 A picture of Vayeate from the SD Gundam Force Collectible Card Game
Community content is available under CC-BY-SA unless otherwise noted.