Vammas is a member of White Base crew, working at Hangar number 2. During the battle of Solomon, he had been called by Captain Bright Noa to take over Mirai Yashima for a pause, allowing her to have words with Sleggar Law just before he left for his last flight. A few days later, Bright suggested to a very tired Fraw Bow to call Vammas to temporarily relieve her at the communication station. 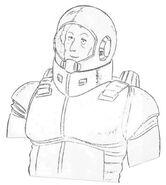