Parviz's SD Gunpla uses the Gundam Astraea Type-F as its base and has a Gundlander series motif.[1] It is implied that Valkylander uses the chest-mounted Dagon's Jaw as its engine unit instead of a solar reactor like its base unit.[2] It has three different transformation modes that can perform a wide variety of attacks: a unique warrior type Valkylander Mode equipped with Gun Horns on various body parts, a dragon type Gundragon Mode ( ガンドラゴンモード, Gundragon Mode?), and a Dragon Fusion Mode ( モード, Dragon Fusion Mode?) with huge wings on its back.[1]

The Gundragon mode was originally supposed to be the Gunpla's strongest mode, but it was utilized as a dinosaur without flying capability due to Parviz's emotional damage.[1] However, it was able to unleash its true powers after Parviz overcome his hardship.[1] Additionally, it was officially named Scarlet Gundragon (スカーレットガンドラゴン, Scarlet Gundragon?) by Parviz.[1] The Gunpla also has the potential to add new optional units, and an example of such options resulted in the Avalanche Valkylander form.[1][3] The evolution of Parviz and Valkylander shows no signs of stopping.[1]

A standard melee weapon which resembles a treasure sword.[1] It becomes the tip of the tail and functions as a tail blade when in Gundragon Mode.[1]

A treasure shield that can store the GN Gunsword.[1] The strength of the combined Gundragon's face parts gives it a solid structure fit for a legendary beast.[1]

A portable firearm, it fires a think wide-spreading beam.[1]

Another portable firearm, it emits a narrowly focused beam.[1]

A large gun formed by combining the GN Flare Device and GN Launcher Device.[1] With additional energy supplied from the "Dagon's Jaw" chest energy intakes as well as the hair-like "Cooling Cord" cooling system operating at its maximum limit, the gun can fire a powerful blast.[1]

The Gundragon and Dragon Fusion Modes are equipped with beautiful, solid, and sharp swan wings similar to the Valkyries of Norse Mythology.[1]

A unique version of the Trans-Am System utilized by the Valkylander.[6] When the system is activated, the entire Gunpla turns red, its eyes glows in an Innovator-like manner and the gold parts on the chest move back a little.[6] Presumably, the system operates like the original Trans-Am, briefly improving the equipped unit's specifications more than three-fold. Similar to the original Trans-Am, the Gundrans-Am causes the Valkylander to run out of energy after reaching its operating limit, leaving the Gunpla vulnerable.[6] It is implied that Gundrans-Am is a portmateau of Gundlander and Trans-Am.[2]

In Gundragon Mode, the Gunpla can shoot fireballs out of its mouth.[7] Known as "Meteor Breath", this attack was enhanced and turned into the "Mega Flare Burst" after Parviz overcome his hardship.[1]

Valkylander with Parviz on first opening 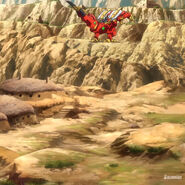 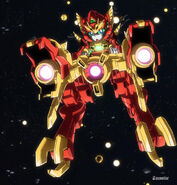 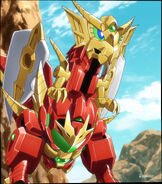