A member of the elite OZ Specials and a member of Zechs Merquise's unit. During the rebellion against the Alliance he scored more kills than the rest of his team combined in his custom black Leo, earning him the nickname "Dark General of Destruction." A man as sophisticated as he is brutal, Farkill's abilities are nearly unmatched in combat, and he believed that the only person worthy of his skill in combat was Treize Khushrenada, whom he hoped to personally defeat before taking over leadership of OZ.

Before the events of G-Unit, he meets the Armonia sisters, Luna and Soris. Hearing of their failed candidacies for Operation Meteor, he allows them to pilot mobile suits in battle with him, earning their loyalty.

After he makes his debut in the manga, he quickly seizes command of OZ Prize from the hands of Roche Nattono, killing Stardust Knight Broom Brooks in the process. before continuing the war against MO-V. Cold, arrogant and ruthless, his motives are to gain power within OZ and is willing to kill subordinates to achieve his goals. However, he never got to realize his ambitions. During the final battle at MO-V, Valder was stunned by the news of Treize's death and ended up being killed by Odin Bernett in single combat. 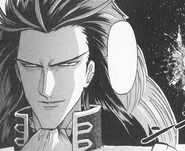