The VTOL Fighter is a vehicle from Mobile Suit Gundam SEED.

A medium-duty aerial assault vehicle, the VTOL Fighter is equipped with two powerful turbines to port and starboard, allowing it to take off and land vertically as well as fly, similar to a helicopter. It is armed with a chain gun mounted to the underside of its nose and two eight-tube missile launchers, and appears to have two canopies. 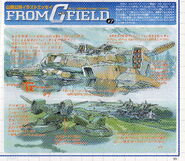