The VGMM-La01b Dahack is a mobile suit hidden form of mobile armor VGMM-La01a Dharma in the Gundam Reconguista in G anime series.

The Dahack is a mobile suit developed by the G-IT Laboratory. Its biggest feature is being able to use Dharma as both a long distance navigation unit and an outer shell armor. For combat the Dahack doesn't use a beam rifle, instead its armaments are four beam cannons that double as beam sabers, it also contains a beam barrier built-in defense system in both hands. In Venus Globe the Dahack performs a non-combatant role, its used for mining and transporting mineral resources.

Built into the Dahack's palms is a beam barrier defense system, it uses an I-Field in order to also absorb the enemy's energy as a ability called Plunder. In peacetime the beam barrier is used for protection against debris during mining.

Four beam generators are located on the back of Dahack. They are beam cannons that double as beam sabers.

Megafauna brought Dahack, Dharma, and Trinity out from the G-IT Laboratory and gave them to the Amerian Army when they returned to the Earth Sphere. 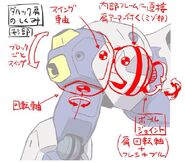 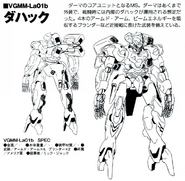 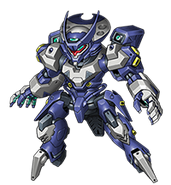 Retrieved from "https://gundam.fandom.com/wiki/VGMM-La01b_Dahack?oldid=442878"
Community content is available under CC-BY-SA unless otherwise noted.