The VGMM-Git01 Kabakali (aka G-IT) is a mobile suit featured in the Gundam Reconguista in G anime. The unit was built by the G-IT Laboratory and it was primary piloted by Mask of the Capital Army.

After Kia Mubeki seized the G-IT Lab, the standard MP machine Re G-IT was used as base for a newly designed flagship and commander machine developed under the codename G-IT only to be named after by Captain Mask as Kabakali. With the Reconguista expected to occur in the near future it holds the capability of entering Earth's atmosphere unaided and Minovsky Flight for Earth's gravity. It was assembled as a general purpose machine for potential practical use of a great variety of special armaments. Both shoulder shields have built-in Minovsky Flight devices. It is a machine created on the assumption of operating in the Earth Sphere. It is completed as a general purpose machine that flourishes all-round due to its sturdy build and high commanding function plus armaments for dealing with long, medium and short range respectively. This unit has an inherit high augmentability similar to the G-Self's and is a machine that can be equipped with various backpacks, the Beam Ring Container is only one of them.

Disc equipped with Minovsky Flight with beam blades that expand from its outer circumference that acts as a mid-range weapon. The beam rings are operated by a laser emitted from the palm of the hands. It is stored in the back container.

A beam saber is built on each of the back of the hands. By adjusting the output, it is possible to increase the blade's length to 2 times the MS size.

Kabakali's medium to long-range armanent, it is possible to fire either straight or diffuse beams. Diffuse beam requires custom bullets and magazine. The beam shotgun also has a missile launcher underneath the barrel.

Kia's dream of piloting it for the final battle after arriving on Earth didn't come true so it was given to Captain Mask.

Kabakali about to throw a Beam Ring. 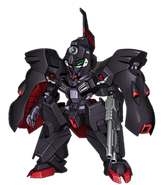 Retrieved from "https://gundam.fandom.com/wiki/VGMM-Git01_Kabakali?oldid=459044"
Community content is available under CC-BY-SA unless otherwise noted.