The VGMM-Gf10 Gundam G-Lucifer is a mobile suit featured in the Gundam Reconguista in G anime.

The Gundam G-Lucifer is a G-type mobile suit developed by the G-IT Laboratory [1] that is still in the testing phase, thus two extra seats are added in the cockpit for checking and operating.[2] Other than the streamlined body, it has a monoeye as its main sensor which gives it a distinct appearance from other G-type mobile suit such as G-Self and G-Arcane in the Earth Sphere. Like the G-Self, it is a “universal standard” MS that can be operated relatively easily by non-combatants. Similar to how Gaeon is specialized to utilize the Big Arm, G-Lucifer is designed specifically to utilize its Skirt Funnels, this embodies the G-IT Laboratory's philosophy of using mobile suit as the main body of special weapons.

Its basic design is highly refined. Not only does it possess main thrusters that have high output and durability, but also Minovsky Flight Units built in its feet that increase maneuverability. It is constructed with Photon Armor, and is equipped with high quality radar. It is a mobile suit with potential that is worthy of the name Lucifer (the morning star, Venus).

The main armament of G-Lucifer, a maximum of 3 can be mounted on its waist. Each skirt funnel has 6 beam cannons on the sides, and a mega cannon at the center.[3] The three skirts funnels can be used not only as an all-range attack as a remotely controlled beam cannons, but also as a barrier by deploying like a triangular pyramid in front of the fuselage. They can also fire their beam cannons while still attached to G-Lucifer. The funnels also function as G-Lucifer's main thrusters, loosing them would mean the lost of both firepower and mobility.

A close combat weapon that emits a blade-shaped beam for melting and cutting through armor. A pair are stored in the G-Lucifer's left thigh.

The G-Lucifer can be equipped with general beam rifles, and in Episode 25, the G-Lucifer equips an Ameria beam rifle that the G-Self had previously used.

During G-Lucifer's adjustment in Venus Globe, it was easily taken away by Manny and Noredo due to the fact that the engineers never expected intruders, and also because of its universal standardized controls. It then became an addition to the mobile suit team of Megafauna, piloted by Raraiya, along with Noredo as a navigator. 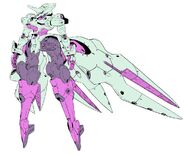 As seen in EXVS2

As seen in EXVS2 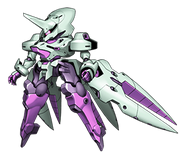 Retrieved from "https://gundam.fandom.com/wiki/VGMM-Gf10_Gundam_G-Lucifer?oldid=459201"
Community content is available under CC-BY-SA unless otherwise noted.