The VGMM-Gb03 Gaeon is a mobile suit featured in the Gundam Reconguista in G anime series.

The Gaeon is a G-line mobile suit developed by the G-IT Laboratory.[1] It is constructed with technology conserved and improved from the Universal Century era, the vast amount of time and technology put into Gaeon makes it a reliable machine with excellent basic performance. Its main body design is simple, but its high power Photon Batteries give it a strong output.[2] It also has advanced control and processing ability demonstrated when operating the Big Arm Unit. Unlike other mobile suits, the face of Gaeon is covered by sensor display that can create different "facial expressions".

A handheld ranged beam weapon with a high particle convergence rate that is capable of concentrating the beam impact to one point. It is constructed with minimal parts to make maintenance easy.

A multipurpose backpack that looks like a pair of big hands with 8 fingers. All of the "fingers" are equipped with a beam saber/beam gun at their tips, while each "thumb" has two more on its surface. The flexibility of the "fingers" allows them to form a shield that covers Gaeon's body, block attacks from almost any direction, and also act as stabilizers for atmospheric flight. The Big Arm Unit is capable of releasing excess energy. When not in use, the backpack can be separated into two parts and stored inside Grod.

The front portion of the Big Arm Unit's "fingers". They can be detached and function as remote controlled beam saber/beam guns.

A mobile armor developed by G-IT Laboratory. The Gaeon can dock with the Conque de Venus and control it.

After accidentally cutting open a hole under the Sea Desk of Venus Globe during the battle with G-Self, Gaeon was buried under the sea along with Conque de Venus and Grod in order to block the outflow of water. 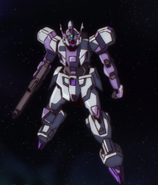 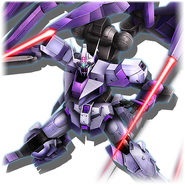 Retrieved from "https://gundam.fandom.com/wiki/VGMM-Gb03_Gaeon?oldid=443950"
Community content is available under CC-BY-SA unless otherwise noted.