The V08-1228 Grimgerde is a mobile suit introduced in the first season of the Mobile Suit Gundam IRON-BLOODED ORPHANS anime and is piloted by McGillis Fareed.

Produced at the end of the Calamity War, the Grimgerde is one of the mobile suit models that used the Valkyrja Frame.[1] The Valkyrja frame was easy to use, lightweight, and compared to the other Calamity War era machines, its design was simple with minimal energy loss.[1][2] In terms of specifications, the Valkyrja Frame had the capabilities to be the main combat machine on the battlefield.[1] However, as it was developed at around the same time as the Gundam Frame, not many people were aware of its existence.[1] Based on remaining data from the Calamity War era, the overall production number for Valkyrja Frame-based mobile suits was small, with a theory that less than 10 units were produced.[2] There was also not much information regarding their combat record.[1]

The Grimgerde was made to be lighter and more mobile compared to other mobile suits of the time.[1] This translated into high mobility when in space, while on the ground, it is nimble as the effects of gravity are minimized.[1] The main disadvantage of its design is that when the suit is in close combat, control of its center of gravity is important, and any piloting mistakes can lead to attacks with little power that will just bounce off the enemy's armor.[1] After the Calamity War, the performance of the Valkyrja Frame was examined and Gjallarhorn decided to use the frame and Grimgerde as the base for their mobile suit development, resulting in the Geirail Series and its successor, the Graze Series.[1][3] As a result, the Graze also inherited the design concept of the Valkyrja Frame and the basic structure of the Grimgerde.[1]

Mounted on the forearm, the pair of shields are part of Grimgerde's basic armor.[1] Each shield stores one Valkyrja Blade on the underside.[1]

A close combat sword designed for the Grimgerde, its blade is made from a rare metal capable of slicing apart MS frames.[1][4] The pair of Valkyrja Blades can be held in hand when in use, or be deployed directly from the Valkyrja Shields by rotating forward from their stored positions.[1]

A rifle that was designed with the Valkyrja Frame's weight balance in mind.[1] A drum magazine is adopted as it allows for high ammunition capacity.[1] The rifle can be stored on the rear skirt armor when not in used.[1][4]

A camera equipped, high sensitivity sensor is installed in the suit's forehead as a sub sensor.[1][5] When analyzing the target's data, this sensor is revealed after the mask containing the suit's vertical main sensor slides down.[1][5] This concealed but revealable sensor concept is later inherited by the Graze series.[4]

The Grimgerde was one of the few Valkyrja Frame using mobile suits produced at the last stages of the Calamity War, but they were ignored despite their good capabilities due to the appearance of the Gundam Frame. After the end of the war, Gjallarhorn re-examined its data and decided to use the Grimgerde and its Valkyrja Frame as the base for their mobile suit series, the Geirail and its successor, the Graze.

In P.D. 323, a Grimgerde was used by McGillis Fareed when he adopted the alias 'Montag' and presented himself as the representative of the Montag Company. It was first used to assist the Gundam Barbatos against a team of Graze Ritters as the Tekkadan tried to land on Earth. Later on Earth, the Grimgerde participated in the battle outside Edmonton against Gaelio Bauduin and his Gundam Kimaris Trooper. During the battle, McGillis revealed that he had been manipulating his allies (including Gaelio, Carta and Ein) for his own plans, and subsequently struck the Gundam Kimaris Trooper's cockpit, presumably killing Gaelio.

In P.D. 325, the Grimgerde was retrofitted into the V08Re-0526 Helmwige Reincar, with its defense capabilities increased to serve as an escort unit for McGillis in his new position as the head of the Outer Earth Orbit Regulatory Joint Fleet, and to fight the mobile armor Hashmal. 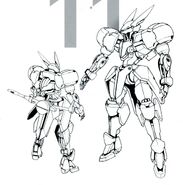 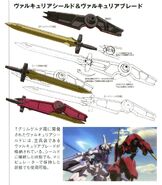 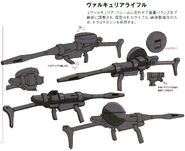 Back to back with Gundam Barbatos (Ep 19) 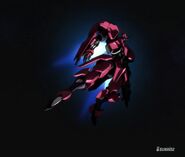