A Valkyria Frame mobile suit passed down the generations in the Jizin family.[1] Its head shares many similarities with the other Valkyria Frame machine, and its main characteristic is the large antenna on the left side of the head.[1] Using its high mobility, the Oltlinde primarily fights using the close combat Valkyrja Double Blade.[1] However, this is not the suit’s original combat style as the Valkyrja Double Blade was originally a Dainsleif launcher during the Calamity War.[1] The Oltlinde also has a binder on its left shoulder for defense and to mount other equipment.[1]

A binder is connected to the left shoulder frame and serves as a defensive equipment.[1] Mount latches are present on the binder’s underside, and possibly used for mounting Dainsleif-related equipment during the Calamity War.[1]

There are records of the Oltlinde fighting alongside the Nadira family’s ASW-G-56 Gundam Gremory during the ending stages of the Calamity War.[1] It is currently piloted by Jizil Jizin, the leader of Gjallarhorn's internal regulatory unit, Ollerus.[1] Jizil later piloted the Oltlinde in an attempt to capture Mina Cerulean (who was actually Mina Zalmfort) from Tanto Tempo's custody. After a fight with Argi Mirage in his ASW-G-29 Gundam Astaroth Rinascimento, Jizil surrendered. This allowed him to verify that Mina was still alive. 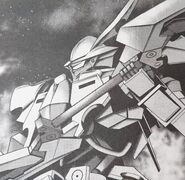 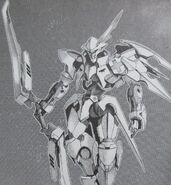 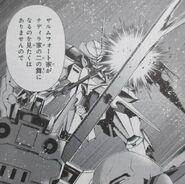 Retrieved from "https://gundam.fandom.com/wiki/V03-0907_Oltlinde?oldid=499662"
Community content is available under CC-BY-SA unless otherwise noted.