Uzumi is the leader of the Orb Union, the "Lion of Orb", and the adoptive father of Cagalli Yula Athha. He is known to be dedicated to the well-being of his nation and uncompromising on his own ideals and the ideals of Orb. Even when he was forced to resign his position as Chief Representative of Orb after it was revealed that the Orb space colony Heliopolis had developed the prototype mobile weapons for the Earth Alliance under his watch, Uzumi still wielded a lot of influence by giving "advice" to his successor Representative Homura, who also happens to be his younger brother. He is the voice of wisdom and reason in the series and is memorable for his speech to Cagalli about the endless cycle of wars: If someone were to be killed in battle by her, then that person's mother would hate her for killing that person, and if Cagalli were to be killed in battle by someone, then Uzumi would hate that person.

When the Archangel was about to enter Orb territory due to a ZAFT attack, Orb forces at first did not allow them access. However, Uzumi decided to let the Archangel in their territory since his daughter Cagalli was on board. He conferred with the executive officers of the Archangel (Murrue Ramius, Mu La Flaga, and Natarle Badgiruel) and offered extensive repairs for the ship in return for data on the GAT-X105 Strike Gundam and the technical cooperation of its pilot Kira Yamato in creating an OS for their MBF-M1 Astray mobile suits.[1] Soon afterwards, Uzumi met with Kira's adoptive parents, informing them that Kira and Cagalli have met, despite an unknown agreement between the two parties that they would never have to meet again. Uzumi blamed the incident on fate and Kira's parents are reluctant to reveal anything else concerning Kira and Cagalli to the children while Uzumi asks=ed if it would be wise if they both remain uninformed that they are actually siblings.[2] When the Archangel was about to depart, Uzumi persuaded the headstrong Cagalli to remain in Orb rather than leaving with the Archangel.[3]

After the destruction of JOSH-A, the Archangel returned to Orb.[4] At this time, the Earth Alliance invaded Orb to acquire their mass driver. They approached by sending an ultimatum to Orb, explaining that they must step down their military and not to resist. However, Uzumi could deduce the Alliance's true motives. If Orb was to ally with PLANT, then the EA would be their enemy and vice versa. Both forces would use Orb's power to destroy each other. Thus, Orb declared opposition towards the Alliance's extremist goals.[5] After two days of fighting, Uzumi realized that Orb could no longer hold off the Earth Alliance, thus he and the other members of the Council prepared to destroy the Kaguya mass driver. Cagalli was concerned for her father, but she was dragged by him to the Kusanagi. He assured her that she was not alone, for she will be with her brother, giving her a picture of a woman holding two infants, with Kira and Cagalli's names inscribed on the back, revealing to her that they were brother and sister. He then told her it was an honor to be her father, as the Kusanagi took off.[6] After the Kusanagi launched into space, Uzumi, along with Orb's ministers, detonate the Morgenroete facility and Kaguya mass driver, killing themselves in the process. This act of sacrifice thwarted Azrael's plan to use Orb's mass driver against the PLANTs.[6]

In late C.E 73, Cagalli received a golden mobile suit, the ORB-01 Akatsuki, as her father's legacy. He also provided an audio message for her, explaining she must use the mobile suit to protect Orb and wishes her a long and happy life.[7] 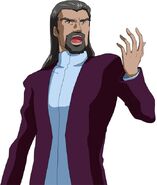 (The Land of Peace, HD Remastered)

(Into the Dawn Skies, HD Remastered)