Due to his young age, Üso is easily shocked by the carnage surrounding him during the time of the Zanscare war. The violence he witnesses, in addition to the feelings brought on by his Newtype powers, make him particularly in touch with the suffering of others. His innocence in life is reflected in fighting as well, letting his anger and fear charge him in attempting to protect his comrades in battle while also attempting to keep casualties to an absolute minimum, even for the enemy.

Üso is quick to combat wrongdoings, and often will fight back when pushed into a corner or when witnessing those weaker than him being harmed.

He is also shown to have a tendency for easily being flustered around the opposite sex, particularly the members of the Shrike Team, Shahkti, and Katejina.

Üso is an illegal immigrant on Earth at Point Kasarelia, and eventually ends up joining the League Militaire in fending off the Zanscare Empire. He is the pilot of the Victory Gundam, and subsequently the Victory 2 Gundam. As Victory Gundam is the darkest of the Gundam series, Üso is constantly left scarred by the reality of war, and the people that keep dying to protect him and their cause. Üso is good friends with Shahkti Kareen, the daughter of Zanscare Queen Maria Pure Armonia. He has a pet dog named Flanders and his father made him a Haro. Interestingly, Üso keeps his Haro with him at all times, even though it is a little bigger than Amuro, Kamille, or Hathaway's Haros. This is probably due to it being a keepsake of his father, and because this Haro not only can control whatever MS it is in, it even attacks armed guards to defend Üso.

Üso's mother, the engineer Myra Miggelle, works for the remnants of Anaheim Electronics, and develops the Victory 2 Gundam for her son to fight with. She is captured by the Zanscare forces, and just as Üso is about to save her, a Lysithea-class battleship explodes and crushes her, taking her head clean off. This is extremely traumatizing for Üso, as he also takes the helmet with Müller's head to be buried, and her death came moments before a temporary cease-fire could be declared.

Üso and Shahkti use the word "Kasarelia" a lot. This is their word for 'a peaceful place', and eventually becomes somewhat of a rallying call for them.

Üso also makes enemies with Chronicle Asher, Shahkti's uncle and Queen Maria's younger brother. The two form somewhat of an Amuro Ray/Char Aznable rivalry. This rivalry ends with Üso destroying Chronicle's MS, ejecting him out of his cockpit and making him fall headfirst into some debris of Angel Halo. However the vengeful Katejina attempts to stab Üso in the back after there battle was finished but Üso recovers, and Katejina is ultimately defeated by Üso's Wings of Light which deflected her beam attack and destroys the ship they were fighting on.

Üso survives the war, and lives with Shahkti, baby Karlmann, Marbet and the other kids who accompanied them back at Point Kasarelia (and not too far away from a gravesite with their fallen friends, Üso's mother, and a Zanscare soldier whose kindness touched Üso). He has matured greatly since before the war, and has outlived almost all of the Zanscare forces, as well as his parents, the Shrike Team, the majority of the League Militaire, and many important members of the Earth Federation. His V2 Gundam, and his old Victory Gundam that he passed on to Marbet are kept not too far away in case trouble brews again. 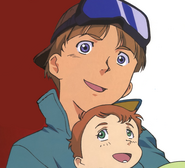 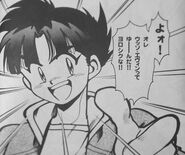 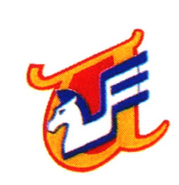 Mathis Walker and Uso Ewin inside the cockpit. 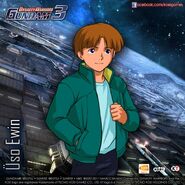 Üso, as he appears in Gundam Musou 3