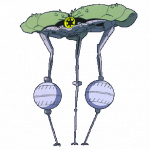 NEEDLER TO THE FACE!

These are chosen based on how well they work, how interesting they are, and just if I would pilot them or feel their not given the love they deserve.

Mechs for other Heroes and Villains

These are examples of Gundams and related mechs that would be good references for them, or at least what these Heroes or Villians would use.

The Composite Search System works in the way my own head-canon sees the DRADIS system working itself.

Overall Batman relies on Stealth since he literally has Ninja Training, his whole visual design is made to make him look like a scary Bat, which is what the later does.

Like Trieze, Bruce came to the conclusion (for different reasons) to focus on combat that forgoes Guns.

Just as the Belphagor is created to defeat other Newtypes, Batman commonly plans and arms himself to face his fellow Super Heroes.

It's rather interesting that Batman's whole mission is about JUSTICE, and these Gundams also center around melee potential, which is also what Batman focuses on as well.

In Death Battle he broke it so his philosophically bought it.

This is something that would really make Tony Stark's day, it looks like the Space Booster used in the anime series and it even has is name in it.

Retrieved from "https://gundam.fandom.com/wiki/User:Stabber_ApSig?oldid=444583"
Community content is available under CC-BY-SA unless otherwise noted.