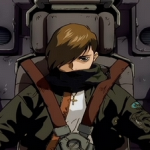 Fellow Earth Federation citizens! I appeal to you all. Zeon is exhausted! It is low on troops! Low on ships, weapons, and even ammunition! Why then should we surrender? Dear fellow citizens, our true enemy is no longer Zeon but our own weak leaders. Hiding behind some notion of "absolute democracy", they are reduced to absolute indecision. Why should we the survivors of this horrible war, entrust them with the power to make decisions for us!?

How can we forget the arrogance of Degwin Sodo Zabi, when he usurped power in Zeon? He claimed that the people of Zeon are a "chosen people". That we of the Earth Federation are hidebound by archaic ways of thinking, and incapable of realizing the new potential for an expanded human consciousness in outer space. That there is no need for the people of Zeon to obey an "Earth Federation" run by outmodeled human relics! Well, even though I am a member of our armed forces, I have to admit that if Degwin was referring to our corrupt Earth Federation bureaucrats, he was correct.

But, fellow citizens, we must not be deceived by Degwin Zabi simply because part of what he says is true. Zeon may be the Side farthest away from Earth, but that is no reason to believe its leader's prattle about communing with the universe!

Degwin Zabi must not be allowed to justy his vision of Zeon because of corruption in one part of our Federation. His words are the dogma of a man plotting a dynasty of Zabi dictators on Zeon. Even if we recognize the existence of the Zeon dictatorship, that in no sense means we must also sink to our knees before it! The Earth Federation is a government, founded on the premise of sovreign individual rights. Mankind was able to advance into outer space as a result of the Federation government, which is itself a crystallization of all mankind’s accumulated knowledge and experience.

Now, Degwin’s son, Gihren Zabi, says it is the weak and inept Earth Federation itself that must be destroyed! Well, let him go ahead and try. Strike at the heart of our weakness! But what right does he — who slaughtered four billion innocent people — have to strike such a righteous pose?

Is Gihren mad? No! Gihren is a despot trying to exterminate the very source of life that has supported and nurtured him. We, of the Federation, shall never comprehend the monstrosity of his actions.

And now Gihren threatens to crash Luna II onto Earth unless we surrender to him. What basis does he have for his demand?! Is he in possession of some sort of absolute truth? No! He possesses nothing more than his own demented dogma. Is the entire Federation completely enfeebled, corrupt, and degenerate? Again, the answer is no. Many good, capable citizens have fought bravely against the threat from Zeon, and we are still strong and alive!! So, then, does Zeon actually possess military superiority over the Federation? Again, the answer is NO!

Fellow citizens, listen to what I say! Gihren’s threats are a mere bluff. Unworthy as I am of my good fortune, I was captured rather than killed by Zeon forces, and thus was afforded the opportunity to see Zeon first-hand. I therefore can assure you that the people of Zeon are exhausted, and there is no way they can possibly strengthen their forces enough to carry out their threats. So I say to you, Gihren Zabi, if you think you can send Luna II crashing to Earth, well then, go ahead and try!

Zeon’s strength was expended in the Battle of Loum. There is no way they can create soldiers overnight, and Gihren Zabi knows it. I therefore appeal to all the citizens of the Earth Federation, to each and every one of you. Zeon is exhausted! Now is not the time for us to kneel before Zeon. It is time for us to rise! Now, more than ever, is our chance to defeat Zeon!

Retrieved from "https://gundam.fandom.com/wiki/User:Sioraf.killeens?oldid=238792"
Community content is available under CC-BY-SA unless otherwise noted.