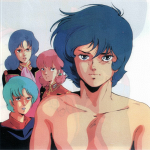 He may have a serious personality whenever he dives into another universe to collect information on the evolution of the human race, but he has a kind and caring side in him.

his piloting abilities are astonishingly quick. As a mobile suit pilot, Shotaro11 excels in land, air, and space combat. He will exploit the disadvantages of his foe and use it to his advantage. Shotaro11 is also able to bring out the full potential of a mobile suit

Shotaro11 arrives at Jupiter station known as Jupiter X, where he meets Leos Alloy and Sthesia Awar. Shotaro11 finally reveals itself as an intelligent core of AI in the same way as EX- and Leos. Sthesia affirms that he still "has a heart". In the final battle between Leos, Shotaro11 and EX-, they managed to defeat EX- by cutting off the Extreme Gundam cockpit killing him and ending his evil ambitions forever.

Retrieved from "https://gundam.fandom.com/wiki/User:Shotaro11?oldid=447113"
Community content is available under CC-BY-SA unless otherwise noted.