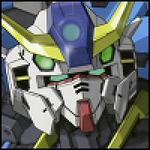 There's not much to say really. I became interested in Gundam (and anime in general) when Gundam Wing first aired on Toonami, which is also the origin of both my love for convoluted plots and my interest in political science, which I am currently majoring in. Other than that, I like to create my own fictional worlds to escape to whenever the real world becomes too depressing and leaves me in despair. I generally spend my time at Gundam Wiki rewriting the mecha pages for better grammar, sentence structure, and overall image whenever I have time, which sadly isn't very often.

Retrieved from "https://gundam.fandom.com/wiki/User:AscendedAlteran?oldid=385489"
Community content is available under CC-BY-SA unless otherwise noted.