The Ural-class is a large transport carrier that appears in Mobile Suit Gundam 00.

Developed after the establishment of the Earth Sphere Federation, this large transport boasts an exceedingly high mobile suit carrying capacity. Designed by ESF engineers (previously from the Union), it is the largest space mobile suit carrier ever built. The class was designed with strong aesthetics after the Virginia-class. Although similar in purpose and design, there are notable differences. The Virginia-class's components was a series of modules collected together to be a space-worthy vessel. ESF engineers used the same engineering methods to create the Ural-class. To save time and resources for mass-production, various systems and components for the Virginia-class was recycled onto the Ural-class, with new system configurations and enhancements.

At the bow, the midsection of the ship, engineers designed a larger version of the mobile suits hangar used by the Virginia-class. Four similar versions of these modules are boxed and interconnected as a single large MS hangar. At the port and starboard, three large MS hangar modules are interconnected with the main body of the ship. Because the hull isn't strong, an additional layer of hull armor was placed at the middle-side section of the class, but for unexplained reasons, ESF engineers never fully reinforce the class to be completely armored. The aft-section are a pair of plasma engines recycled directly from 2 Virginia-class ships. The short-cylinder section to the engines are reconfigured to be attached at the rear port and starboard section of the outer hangars. With so much space, a single Ural-class can hold up to 36 mobile suits at its side containers, and 24 in the central container, for a maximum capacity of 96. The central section can also be utilized to carry a large mobile armor like the GNMA-Y0001 Empruss or GNMA-0001V Regnant.

For combat, the ship features a loadout of laser weaponry and a wealth of GN Missiles, making it an effective anti-ship fighter. Because of how its weapons are arranged, the ship's weapons are best used to fire face-forward. The ship has weak defense at the rear and can be easily be crippled by enemy MS forces. Like most ESF ships, the class is weak at close range combat. It largely depends on its MS to help compensate for its weaknesses in combat; the class is best used at long-ranged combat and fire support. Because of its weaknesses, the Ural-class is often used as rear support for the Baikal-class. By AD 2314, the Earth Sphere Federation Army retrofitted all their ships with hybrid propulsion to co-utilize between plasma and particle propulsion. For emergency speeds, the ship can execute Trans-Am.

The Ural-class was first seen pre-taking in a resupply/offloading operation where a single vessel of this class transferred numerous GNX-704T Aheads, a GNZ-003 Gadessa, a GNZ-005 Garazzo, a GNZ-007 Gaddess, and the GNMA-0001V Regnant to the fleet of Baikal-class vessels which were currently involved in the A-Laws' attempt to hunt down the renewed threat posed by Celestial Being.

Much later on, a rogue ESF Army officer, Colonel Kati Mannequin returns in command of the coup faction commanding from a Ural-class vessel. Catching the A-Laws' fleet by surprise, the coup faction supported Celestial Being and Katharon as they fought the remaining A-Laws forces. After the A-Laws fleet of Baikal-class cruisers is nearly completely destroyed by a shot from the GN Rail Cannon of the Innovators' Celestial Being, the ESF Coup forces remain inactive until the Gaga Forces begin to overwhelm the CBS-74 Ptolemaios 2. The attack forces Mannequin and Klaus Grad to order their forces forward to support CB's efforts with Kati's Ural-class opening fire with its main laser cannons. The same Ural-class flagship is almost destroyed by GNZ-004 Gagas, but are stopped by Patrick Colasour and his GNX-609T GN-XIII - much to the dismay of Kati who believed Patrick to have died.

In AD 2314, numerous Ural-class carriers were sighted among the ESF's "Absolute Defense Line" during the final battle against the ELS, with one such vessel surviving the battle. 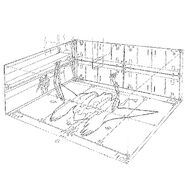