He belongs to the Principality of Zeon's Assault Mobile Force, and is a large soldier with a height of 190 centimeters. As M'Quve's second-in-command, he always followed him around and performed miscellaneous tasks. After M'Quve is killed in the battle of Texas Colony, he is entrusted to deliver a white porcelain vase to Kycilia Zabi, which he favored as a "good thing", but immediately after M'Quve's death, he comes under Delamin's command in the surrounding space. He advises a preemptive attack on the White Base, but is rebuffed by Delamin, who waits for Barom to arrive and then attack the White Base in the nick of time. Later, when they learned that Barom's Chivvay-class heavy cruiser was engaged in battle with the Wakkein fleet, they moved to rescue it, but the White Base took the lead, and the balance was suddenly shattered, the Delamin fleet was annihilated, and he was killed in action. 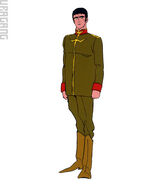