She is generally cheerful and diplomatic, and strongly admires her older brother Asemu and her later sister-in-law Romary.

She goes to the same high school as Asemu before he graduates, and in A.G. 142, she travels around the world as a medical volunteer. She continues to support her nephew Kio Asuno, who was born later, along with Romary and Flit. In 164 A.G., she becomes the head of the Diva's medical team and is in charge of the ship's health care together with Wendy Hertz. When Flit was about to go out of control after Kio was kidnapped by the Vagans, she was able to persuade him to regain his equilibrium. 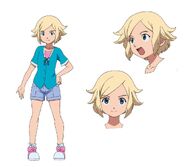