A variant of the UW-33 Union Mobile Worker, its top turret is of a different design with a 40mm machine gun in the center, an anti-personnel machine gun on the left side, and an antenna at the back.

The Mobile Worker's main armament, it is mounted on a rotatable turret.

Mounted inside the Mobile Worker's turret, on the left of the 40mm machine gun, it is used against infantry.[1]

A pair of 6 tubed grenade launchers are attached to the sides of the Mobile Worker. The grenades fired are propelled and stabilized by tail fins.

After arriving on Earth, Tekkadan received a shipment of 20 Union New Model Mobile Worker from Teiwaz. While newer than the TK-53 CGS Mobile Workers, they do not possess Alaya-Vijnana systems for their pilots to interface with. 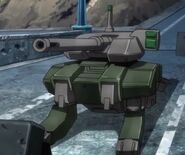 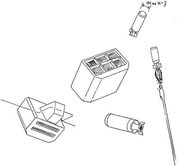