1
Double-Fake Under The Gundam (ダブルフェイク アンダー･ザ･ガンダム) is a side-story that focuses on a decoy operation launched by Char Aznable in U.C.0090. It is an original Gundam manga created by Yuji Ushida, originally published in Bandai's Model Journal magazine.

Set in the Universal Century 0090, between Mobile Suit Gundam ZZ and before Mobile Suit Gundam: Char's Counterattack, the plot centers around Darry Neil Guns, a member of the Monotone Mouse Corporation who was repairing Texas Colony at Side 5 -a Space Colony that was damaged from the One Year War, When they are attacked by the New Summer Project terrorist organization's Colorde forces. Both the anti-Earth Federation militant group Colorde and the New Summer Project were actually being used as a front for the resurgence of the Second Neo Zeon movement under the leadership of Char Aznable. In an attempt to resist Colorde, the Monotone Mouse Corporation is forced to team up with the Earth Federation Force's Arahas Force and fight. Darry Neil Guns, a fan of the Gundam, modified his worker mobile suit to resemble the original RX-78 Mobile Suit Gundam, and through mistaken identity it is acknowledged as the actual Gundam. 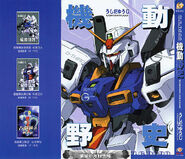 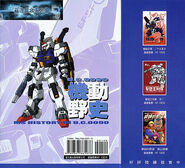