Unato Ema Seiran is the prime minister of Orb and a member of the high ranking Seiran family. He is also the father of Yuna Roma Seiran and had a hand in the arranged marriage between his son and Cagalli.

After the Junius Seven incident, Unato felt the need to join up with the Earth Alliance but received strong opposition from Cagalli. With his political experience and high status Unato was able to also manipulate the young and inexperienced leader to a degree where she finally agreed with his idea.

When Lord Djibril had to flee Heaven's Base after ZAFT conquered it, he went to Orb, where Unato and Yuna allowed him to stay. When ZAFT requested for Orb to hand Djibril over, the two Seiran's denied that he was even there, which resulted in ZAFT attacking Orb. During the battle, Unato takes refuge in a shelter along with other Orb officials, but that place would turn out to be his grave as a Geo-GOOhN broke into the shelter, killing him amongst others. 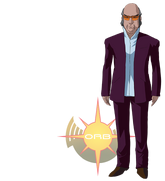 Gundam SEED Destiny Character Sheet
Add a photo to this gallery
Retrieved from "https://gundam.fandom.com/wiki/Unato_Ema_Seiran?oldid=443308"
Community content is available under CC-BY-SA unless otherwise noted.