Ulube's Gundam is a mobile fighter that appears in the TV anime Mobile Fighter G Gundam.

This is the Gundam that Ulube Ishikawa boarded in the 12th Gundam Fight. Although it made it to the final league, it was defeated by Master Asia's GF12-035NH Kowloon Gundam. Although the coloring is different, the shapes of the various parts of the fuselage indicate that the development concept is a direct ancestor of the GF13-017NJ Shining Gundam. 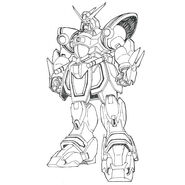