The UMF-4A GOOhN is a Mobile Suit introduced in the Mobile Suit Gundam SEED anime series.

Developed by the Clarke Design Bureau[1] based on the YF-3A GINN FEMWS,[2][3] the GOOhN was ZAFT's first formally adopted aquatic mobile suit for the invasion of Earth.[3][4] Designed with high speed and firepower in mind, the GOOhN was primarily used for attacking enemy vessels and coastal bases, and greatly contributed to the severing of naval supply routes in the Atlantic and Pacific Oceans.[3][4][5]

To reduce water resistance, it had a streamlined body and by folding its legs, it could transform into a cruising mode for increased speed and traveling range underwater. Installed near its mono-eye camera was a pair of phonon maser cannons, a type of sonic weapon that could be used in water. Its arms were fitted with 7-barrel torpedo launchers, and the top of its head conceal a pair of 1030mm torpedo launchers. Finally, its fin contains a 47mm rifle dart launcher.[3][4][6]

The GOOhN also inherited the Lorenzini Sensor - a type of electrical impulse sensor based on the ampullae of Lorenzini - from the GINN FEMWS, granting it excellent enemy detection ability in water.[7][8] Overall, the GOOhN had excellent underwater combat abilities, but there were areas for improvement: its maneuverability was relatively low, and although it could be used for landing operation in mobile suit mode, its performance on land was poor.[3][4][5]

Mounted beside the mono-eye, the pair of phono maser cannons were powerful sonic weapons capable of sinking submarine carriers and could also be used outside of the water.[3][9] Though phonon maser was not visible to the naked eye, the coaxial targeting laser from the cannons was visible.[5]

The GOOhN featured two 533mm 7-tube torpedo launchers on its forearms.[3][5] These torpedoes were rocket-propelled and could be used both in and out of the water.[4][5] The torpedo launchers were usable in both MS mode and Cruising mode.[5]

Fired from the pair of launchers concealed in the top of the GOOhN's head, these large torpedoes could only function in water, unlike those of the 7-barrel torpedo launchers.[3][5] The supercavitating torpedoes were very powerful but also difficult to use.[5]

Mounted on the fin at the back and usable only during Cruising mode, this weapon was designed for aquatic use, but could also be used against aerial targets at close range. The fired darts would pierced through targets and destroyed them from within.[5]

A specialized sensor modelled after a shark's electroreceptor organs, which are known as Ampullae of Lorenzini. It can detect electrical impulses in the water and are often equipped on underwater mobile suits.

Despite being one of the most extreme environments on Earth, the ocean covered 70% of the planet's surface and could not be ignored during ZAFT's strategic planning for the invasion of Earth. Therefore, the development of aquatic mobile suits was a priority for ZAFT. On March 15, C.E. 70, in preparation for Operation Ouroboros, the GOOhN was unveiled along with the AMF-101 DINN, the TMF/A-802 BuCUE, the TFA-2 ZuOOT, and the ZGMF-515 CGUE.[10]

Several GOOhNs were used to attack the Archangel during both the First[9] and Second Equatorial Skirmish,[11] but all were destroyed by Kira Yamato and his GAT-X105 Strike Gundam. Many GOOhNs later took part in Operation Spitbreak, a massive attack on the EA military headquarters, JOSH-A.[12][13] However, this operation ended in failure when the EA activated the base's Cyclops System, destroying the majority of ZAFT mobile suits in the area. Afterwards, many of the surviving GOOhNs participated in the Battle of Porta Panama to destroy the EA's last Mass Driver.[14]

During the war, ZAFT also created the UTA/TE-6 GOOhN Underground Mobility Test Type, a variant of the GOOhN capable of drilling into the ground and conduct a variety of ground-related missions. This machine was eventually put into limited production as the UTA/TE-6P Geo-GOOhN. 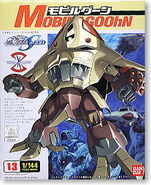