The UGY-R45 Garm Rodi is a mobile suit introduced in the second season of the Mobile Suit Gundam IRON-BLOODED ORPHANS anime.

The Garm Rodi is one of the many machines created through customization of the Rodi Frame, which was mass-produced during the middle period of the Calamity War, and is equipped with heavy armor.[1][2] Making use of the frame's characteristic versatility, it achieves a fine balance between mobility and defensive performance.[1] The Dawn Horizon Corps utilize this versatile unit as the organization operates in a wide variety of areas, and needs a machine that could adapt to various combat situations.[2]

The Garm Rodi has an unique armored visor for the head camera, and the commander-use version has a different silver gray color scheme, an added blade antenna on the head and another shoulder shield.[2][3] The Garm Rodi's weapons are the same for both the standard type and the commander type and its pilot can select from a wide variety based on preferences and combat situations.[2][3] Including the commander type, Dawn Horizon Corps’ MS teams typically consisted of 6 machines.[4]

Main melee weapon, it is stored on the rear skirt armor's weapon rack when not in use. The hammer has built-in thrusters and its handle can flip out, granting the weapon a longer reach.[2][5] The weapon's weight balance also changes with the handle's position.[3] It is usually held with two hands, with the handle folded and in this form, it serves as both a defensive and offensive weapon, and can be used for repeated strikes.[2][3] Single handed use of the boost hammer when its handle flips out is for forceful strikes.[3]

Main ranged weapon, it is small and easy to handle.[2] Can be stored on the rear skirt armor's weapon rack when not in use.[2]

A pair are stored on the waist front armor.[2]

Mounted on the left shoulder. The commander type has an added shield on the right shoulder.

A medium-to-long-range rifle developed by Hēphaistos, its fore grip can swing either directions.[2][6] Can be stored on the rear skirt armor's weapon rack when not in use.[2]

A large weapon for close-range combat used by pirates.[6] It can be held using both the primary grip and the secondary grip behind the blade.[2] Can be stored on the rear skirt armor's weapon rack when not in use.[2]

Installed on the Garm Rodis used by the Dawn Horizon Corps' human debris.[2] This organic device system is an old man-machine interface developed during the Calamity War to maximize the abilities of the mobile suit. Hence, most mobile suits from that era are compatible with it. The system has two parts, one part is installed in the mobile suit, and the other part is implanted into the pilot’s spine. With this system, the pilot can connect to the mobile suit's computer and directly process mobile suit data. It also allows the pilot (even uneducated ones) to operate mobile suit for combat without reading the instruction manual. The implant in the pilot also enhances spatial awareness. The drop in technical capabilities after the Calamity War, coupled with the use of an incomplete version of the system in the Outer Sphere areas (such as Mars and Jupiter), lead to the implant surgery having a low success rate and can only be done at a young age to let the implant fuse as the pilot grow.

Several Garm Rodis were first seen being used by the Dawn Horizon Corps who were hired to attack the Admoss Company's half-metal mine. However, Kudelia Aina Bernstein had engaged Tekkadan to protect the facility. Although the Garm Rodis performed decently against the STH-16 Shidens deployed by Tekkadan, they became overwhelmed when Mikazuki Augus's ASW-G-08 Gundam Barbatos Lupus arrived and soon retreated.

The Garm Rodis were later deployed during the space battle between the Dawn Horizon Corps and Tekkadan. Again, they were no match against the Gundam Barbatos Lupus, nor were they any match for Akihiro Altland's ASW-G-11 Gundam Gusion Rebake Full City. After some intervention by Gjallarhorn, the battle ended when Tekkadan captured the Dawn Horizon Corps' leader. 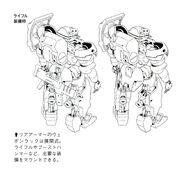 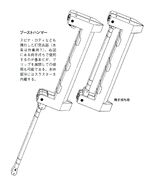 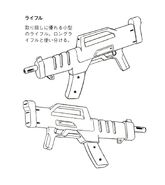