The Landman Rodi is a mobile suit from the second season of the Mobile Suit Gundam IRON-BLOODED ORPHANS television series.

Some UGY-R41 Man Rodis used by the space pirates Brewers were modified for ground use after being captured, and they were eventually deployed to Tekkadan's Earth branch.[1] Since it is equipped with the Alaya-Vijnana System, it can display its full mobility under Earth's gravity and Mars'.[1][2] The largest difference with the Man Rodi is the Landman Rodi's new legs, which are suitable for ground combat and has a different thruster placement.[3] As these legs use high-class parts, unlike the low cost space-use version of the Man Rodi, the suit is also capable of operating in space without any issue.[4][5]

A pair of vulcan guns are mounted at the top of the suit's head.

A close combat weapon with varied uses. Aside from functioning as a hatchet, it can also be used as a hammer since there is a hammer head on the opposite side of the blade. Below the hammer head is a thruster unit, which upon activation, can enhance the weapon's attack power or to allow it to travel further when thrown. The thruster unit also functions as an attachment point for storing the weapon on the rear skirt weapon mount.

A simple mobile suit-use submachine gun that is widely circulated. Due to its light weight, it is easy to handle. It can be fired single handedly or held with both hands, and during precision firing, the stock is extended. The Submachine gun can be stored on the same rear skirt weapon mount as the one used by the Hammer Chopper if it is free.

One hand grenade can be stored behind each side skirt armor. Besides the normal explosive grenade, there is also other variations like smoke grenade and their blast timing can be altered by shooting at it.

Used for grappling or as an anchor, one is mounted in each forearm. Claws can be deployed from the tip of the wire hook.

During the Arbrau-SAU conflict, Tekkadan members sortied in at least four Landman Rodis alongside the AEB-06L Hloekk Grazes and several mobile workers. At least one Landman Rodi was destroyed, it and its pilot left behind on the battlefield when Galan Mossa ordered Aston Altland and his team to retreat to their forward HQ.

Near the end of the conflict, Aston and Takaki Uno piloted their Landman Rodis in an attempt to defeat McGillis Fareed, the commander of the intervening Gjallarhorn forces. Using teamwork and taking advantage of their Alaya-Vijnana System, they disarmed McGillis, but he regained the upper hand by wrecking the right arm of Takaki's unit and used its fallen Hammer Chopper to crush the cockpit of Aston's unit. Despite his fatal injury, Aston managed to lock McGillis's Graze Ritter Commander Type in place, but reinforcements arrived and saved McGillis.

After the conflict, the Earth branch was dissolved and its assets including the three remaining Landman Rodis were brought back to Tekkadan's Mars HQ. The three units were then assigned to Dante Mogro, Derma Altland and Chad Chadan, who used his machine to spur with Hush Middy. During the fight, Hush was surprised by how fast the Landman Rodi is despite its bulk.

The three Landman Rodis were deployed during the battle against the Mobile Armor, Hashmal. Notably, Chad piloted his Landman Rodi to save an unconscious Akihiro Altland, and drew the MA's attention by throwing his Hammer Chopper at it, putting it back on course for the planned ambush point. The Landman Rodis then worked with the STH-16 Shidens to fend off the Plumas while Mikazuki Augus finished off the Hashmal in his ASW-G-08 Gundam Barbatos Lupus.

The Landman Rodis was next used during Tekkadan's assault on JPT Trust, an attack made in retaliation to the deaths of several Turbines members and murder of Lafter Frankland. Chad and Dante partner up, covering each other while Derma operated solo depending on the situation.

The three Landman Rodis later took part in the battle against the Arianrhod Fleet during the coup by McGillis Fareed. During the battle, Chad and Dante retreated from the main fight and rushed back to defend the Tekkadan's ships once their opponents were defeated. The left arm of Derma's Landman Rodi was destroyed by a rocket, though since the unit was still operational he continued to fight. All three units survived the Dainsleif volleys unscathed, falling back to defend the NOA-0093 Isaribi as Tekkadan retreated from the battle. During their retreat, Derma's unit was hit, damaging the cockpit and severing his left arm. The machine was quickly recovered by Dante's unit.

When Tekkadan made their last stand, only Dante's Landman Rodi was deployed. The Landman Rodi's left arm was severed at the elbow by a Graze, but Dante managed to knock the enemy out with a punch which left its right hand damaged. He was then ordered to fall back, and abandoned the unit at the Mars HQ. Whether it and the other two Landman Rodis survived the orbital Dainsleif barrage is unknown. 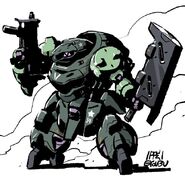