A pair of close-combat mobile suits used by the Hakuri siblings, a mercenary team composed of elder brother, Sampo, and his younger sister, Yuhana. The two Hakuri Rodis were modified versions of two UGY-R41 Man Rodis the siblings found by chance during a job in the debris zone close to Mars. Since the head, back and cockpit were damaged or destroyed when the units were recovered, these parts were substituted with new ones. Thus, their cockpits are no longer equipped with Alaya-Vijnana System that the Brewers had installed. Other than this, the basic performance of the two Hakuri Rodis are comparable to the Man Rodi's. Sampo's machine usually acts as a support for Yuhana, who is more aggressive.

A short size hatchet-like weapon that increases the mobile suit's power in close combat. There are thrusters on the opposite side of the blade, and they can be activated at the time of impact to deal greater damage. It is used by Sampo's unit.

A long axe with a hammer at the tip. The hammer is actually a spike ball and is connected to the axe's shaft via retractable chains, hence it can be shot out or used as a morning star. Overall, it is a close-combat weapon with a long effective range. It is used by Yuhana's unit.

A simple mobile suit-use submachine gun that is widely circulated. Due to its light weight, it is easy to handle. It can be fired single handedly or held with both hands, and during precision firing, the stock is extended. It is stored on the rear waist armor when not in use.

One hand grenade can be stored behind each side skirt armor. Besides the normal explosive grenade, there is also other variations like smoke grenade and their blast timing can be altered by shooting at it.

The Hakuri siblings sortied in the Hakuri Rodis to capture Liarina Morugaton on behalf of Gianmarco Salerno, but both were driven off by Argi Mirage in his ASW-G-29 Gundam Astaroth. 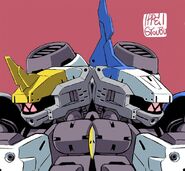 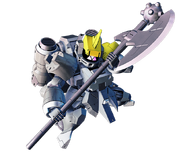 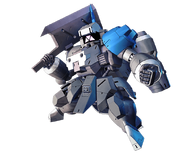