Tubarov Bilmon (ツバロフ・ビルモン) is an executive member of Romefeller Foundation and the OZ's Chief Engineer. A secondary antagonist during the first half of the series, this brilliant engineer and technical designer was thuggish and brutal in his personal dealings, which put him on a collision course with both Treize Khushrenada and his adjutant, Lady Une.

A gifted engineer, Tubarov was valued by the Romefeller Foundation for his technical expertise, and designing ability. The Mobile Dolls were his most prized invention, from the earliest Leo-based suits, to the later models which were capable of space flight. Tubarov displayed an inordinate attachment to the Mobile Dolls, and his obsession with perfecting them ultimately played a role in his downfall.

Personality-wise, Tubarov was a thuggish, unpleasant individual, whose plans lacked subtlety. When confronted with a problem, his solution was inevitably to apply more and more brute force. He had a short temper, a loud angry voice, and a tendency towards ranting when he was mad. His only loyalty was to himself and his Mobile Dolls, as evidenced by his betrayal of Lady Une, one of his project's staunchest supporters. Tubarov liked war, as it gave him the chance to demonstrate just what his Mobile Dolls were capable of, and relished the opportunity to hurt people, showing an utter lack of morals. He had no qualms about turning the Mobile Dolls loose in populated areas, and attempted to murder the Gundam pilots due to a petty dislike. He experienced a total mental breakdown shortly before his death, during which he claimed to be invincible.

An executive member of the Romefeller Foundation, Tubarov created the Mobile Doll system to help consolidate Romefeller and OZ's control over the planet, gaining Duke Dermail's trust in the process. Tubarov believed that his machines were far superior to any human being, a fact that ensured he and Treize Khushreneda, OZ's military commander, would never get along. When Treize interfered with a test of the Mobile Doll system, their relationship was permanently soured; Treize's eventual removal as OZ's commander-in-chief owed much to Tubarov and Dermail's disapproval.

Dermail eventually sent Tubarov to the colonies, where he frequently interacted with Treize's adjutant, Lady Une. Unlike Treize, Une believed there was value in the Mobile Dolls, and she lent Tubarov her full support, believing that his inventions would help keep human casualties down. Tubarov was appreciative of her support, but found that her pacifistic intentions rankled him: he wanted his Mobile Dolls to see combat, something that Une hoped would never have to happen.

Tubarov also disagreed with Lady Une's collaboration with the captured Gundam pilots and scientists on the Mercurius and Vayate projects. While Une was out dealing with Quatre Winner and the Wing Zero's attack on the colonies, Tubarov and his loyalists began a rebellion against Une. Taking control of the Lunar Base, Tubarov cut off the oxygen to the Gundam pilots' cell, leaving them and their scientist mentors to die. When Lady Une returned and turned the oxygen back on, Tubarov ambushed and shot her, leaving her in a coma. Unfortunately for him, he was unable to prevent the Gundam pilots' escape.

With the colonies fully supporting OZ and Romefeller, Tubarov began construction on the massive battleship Libra under orders from Duke Dermail, who hoped to use it as Romefeller's symbol and flagship. All was not well, however. With Une's removal as ambassador and the enormous demand for resources to construct the monstrous battleship, Tubarov began to get increasingly tyrannical on the colony citizens, squeezing them of both resources and manpower. The colony citizens became so tired of the situation that the secret White Fang rebel movement, led by Quinze and Colonel Sedici, began gathering momentum and used this opportunity to come out of the shadows.

Tubarov was captured by the White Fang, and imprisoned by the rebels in OZ's lunar base, who claimed they would make him regret oppressing the colonies and planned to put him through a public execution for the crimes he committed. Escaping while being escorted to imprisonment, Tubarov made his way to his control room, where he unleashed the Mobile Dolls, ordering them to kill anything they saw. Although having the upper hand at first, the tables turned when Wufei in his Altron Gundam appeared during the battle and started attacking sides and destroying that section of the base.

As the entire complex collapsed around him, Tubarov's mind snapped. Ranting about how he and his precious Mobile Dolls were invincible and would one day rule the world, Tubarov and the room he was in, were caught in one of the explosions that tore through the facility. His death, and the seizure of his technology by the White Fang, marked the beginning of the end for the Romefeller Foundation, and the start of the colonial rebellion. 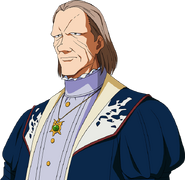 Add a photo to this gallery
Tubarov Bilmon
Hide groups Hide incoming properties
Information is currently being retrieved from the backend.
Retrieved from "https://gundam.fandom.com/wiki/Tubarov_Bilmon?oldid=467876"
Community content is available under CC-BY-SA unless otherwise noted.