The most experienced soldier of the Gundam pilots, and the only one born on Earth, Trowa is a quiet but determined person. Patient and calm, he will analyze a situation before acting. He hides his feelings well behind an impassive mask. Despite his stoic demeanor, Trowa developed a close friendship with Quatre Raberba Winner. Symbolically, Trowa is often affiliated with masks; not only because of his neutrality and his talent for infiltrating enemy ranks, but also because of his job as a circus clown—a job where he wears a costume and painted mask. Trowa is also shown to have a strong connection with animals, evidenced by when he first joined the circus. On the battlefield, Trowa attacks his enemies with utter ruthlessness and deadly accuracy.

Trowa has a great deal of emotional control, allowing him to calmly approach any situation without being emotionally compromised. He's naturally gifted in acrobatics; he has a good ability to balance his body and applies it to his Gundam in combat. Trowa is also gifted in calming animals and even befriending them as he's able to tame a lion with ease. Like him and the rest of the Gundam pilots, Trowa is skilled in firearms, infiltration tactics, and MS piloting.

Triton (Trowa) and Catherine were separated on the Earth during a rebellion in which their parents were killed. In the ensuing chaos, Trowa suffered a head injury that wiped his childhood memories and has since drifted to space and across colonies until he joined the Barton Foundation.

Before he joined the Barton Foundation, No-Name—what Trowa was known as before he took on the name of the real Trowa Barton—was a mobile suit pilot in a mercenary group. In the year A.C. 190, during his time there, he met a girl named Middie Une (no relation to OZ's Lady Une). One day, during an operation the Alliance had got wind of, several of the rebels betrayed the group to join the Alliance. No-Name was able to save the life of his commander and the commander expressed the traitors couldn't have informed the Alliance of the operation. Determined to destroy the mercenaries, the Alliance bombed them and only No-Name and Middie survived. After their escape, No-Name revealed that Middie was the traitor as he had noticed that her handheld game was actually a transmitter and that the crucifix she gave him was one too. Middie stated she only aided the Alliance to support her brothers and sick father. She also admitted that she truly had loved No-Name but also hated him for being an empty person with nothing to hold him back. No-Name responded by saying she was better off than him since she had a family to go back to. After shooting her transmitter, he left Middie. Following this incident, he decides to go into space.

No-Name eventually became a mechanic working on the Gundam Heavyarms in space and came to know its intended pilot, Trowa Barton(son of the Barton Foundation's ambitious and bloodthirsty leader, Dekim Barton). Trowa even shared a small secret with No-Name: he had a niece, named Mariemaia, who was going to rule the Earth once Operation Meteor succeeded. However, the other scientists who designed the Gundams refused to commit mass murder and convinced their pilots to only attack OZ military bases. Unfortunately, Doktor S failed to convince Trowa, who was intent on executing the original Operation Meteor. The Gundam pilot to-be planned on reporting Doktor S's disillusionment to his father but was shot and killed by a mechanic, who had family on Earth. No-Name witnessed the murder and offered to take the dead Trowa's name and pilot Heavyarms as part of the modified Operation Meteor.

The new Trowa Barton became one of the five pilots who participated in Operation Meteor, in which five pilots launched from their respective colonies with a Gundam to Earth to wage war against the oppressive United Earth Sphere Alliance and OZ. Once on Earth, Trowa quickly found civilian cover as a circus performer and was unknowingly reunited with his sister Catherine Bloom.

Eventually, Trowa met the other Gundam pilots and struck a friendship Quatre Raberba Winner. After being defeated by Treize Khushrenada following a botched mission that resulted in the deaths of Alliance pacifists, including the Alliance's lead pacifist, Field Marshal Noventa, Chang Wufei spent time with Trowa at the circus. A while later, during a mission in Siberia where Wing Gundam pilot Heero Yuy self-detonated his mobile suit after the colonies were threatened by OZ second-in-command Lady Une, Trowa recovered his comrade's comatose body and nursed him back to health. During his recovery Heero told Trowa to live by his emotions as Odin Lowe had told him. When the circus was to perform at an OZ base, Trowa decided to self-destruct Heavyarms and sacrifice himself. He was ultimately stopped after opening his cockpit and telling Catherine Bloom to flee only to be punched back to his senses by her.

After leaving the circus with Heero, the two of them traveled together as part of Heero's plan to apologize to the family members of the late Alliance leaders. The two were eventually tracked down by Lucrezia Noin and went to Antarctica for Heero to continue his duel in Siberia with OZ ace Zechs Merquise . Although Zechs had had Heero's Wing Gundam rebuilt, Trowa allowed Heero pilot his Heavyarms for the duel as Heero did not want to accept charity. During the duel, Trowa piloted Wing Gundam to hold off OZ's search party.

Sooner after that, Trowa and his fellow pilots returned to space to fight OZ(although Trowa chose to leave Heavyarms on Earth), who had begun liberating the colonies from the Alliance's control. While in space, Trowa chose to infiltrate OZ, posing as a colony volunteer and wowed OZ colonel Lady Une. He was soon selected to pilot the prototype mobile suit, OZ-13MSX1 Vayeate, which was created by the captured Gundam scientists. After he helping capture Heero who tried to kill the Gundam scientists, Trowa recommended Heero pilot the twin unit created by the five scientists, OZ-13MSX2 Mercurius, with the detonation switch placed in his suit as a precaution. While undercover, he and Heero first faced the OZ-00MS Tallgeese, piloted by Zechs who had left OZ and was visiting space under his real name Milliardo Peacecraft as a goodwill ambassador for the Sanc Kingdom. The two later confronted a mentally unstable Quatre, who had destroyed a resource satellite and an evacuated colony with the powerful Wing Zero after having witnessed his father be killed for not agreeing to building weapons for OZ on his colony. Quatre came to his senses after the Vayeate was destroyed by Wing Zero's buster rifle and Trowa was presumed dead.

Trowa was later found amnesiac, wandering a colony by Catherine. Determined not to see him feel the horrors of war again, she developed a protective attitude towards Trowa and appointed herself his "big sister". Even after fellow pilots Duo Maxwell and Quatre tracked him, she refused to allow them to take Trowa. However, her long-lost brother ultimately choose to re-join them despite his continuing amnesia. Only after he borrowed Wing Zero to defend a colony where Catherine and the members of his circus troupe were threatened by OZ did he fully recover his memory, resultant from exposure to the Wing Zero's ZERO System.

Using the newly modified Heavyarms equipped for space combat that was brought from Earth by Sally Po, Trowa survived the Eve Wars between the Milliardo Peacecraft-led White Fang (an extreme group of colonists attempting to destroy Earth) and the World Nation led by Treize, after he replaced Queen Relena as leader. With the battle won, Trowa returned to Catherine and the circus.

With seemingly no use for his Gundam, Trowa sent Heavyarms to Quatre at the latter's request to send them into the Sun for disposal. Once Mariemaia (the illegitimate daughter of Treize) Khushrenada's uprising began, Trowa again went undercover to infiltrate Mariemaia's army. He was quickly discovered by Dekim Barton and as he moved to attack Dekim, he was stopped by Wufei, who had also joined Mariemaia's cause. After pledging his allegiance to Dekim in exchange for sparing his life, Trowa continued to operate as a Mariemaia soldier and while he appeared to attack him, aided Duo in escaping into the colony X-18999. He eventually discovered Dekim's true plan was the original Operation Meteor, and with Heero and Duo's help, Trowa was able to stop the colony drop. After Quatre recovered the Gundams, Trowa again piloted his suit one last time and disabled as many Serpents in Brussels as he could until Heavyarms ran out of ammo. After the three self-detonated their Gundams in a clearing, Quatre and Duo convinced Trowa to keep his current name and Trowa again returned to the circus.

In MC-0021, alongside Instructor W, Trowa (under the alias "Doktor T") develops 4 new mobile suits for unknown purposes. When asked by his young look-alike Trowa Phobos what the T in his name stands for, he first answers 'Trowa', but later concedes that it stands for 'Triton', confirming other series materials which indicate that Trowa is Catherine Bloom's long-lost brother. 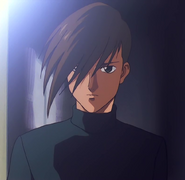 Trowa performing as a clown 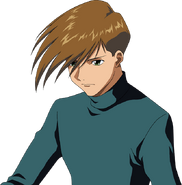 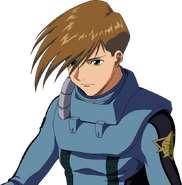 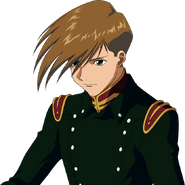 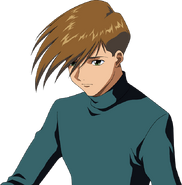 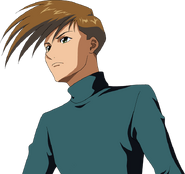 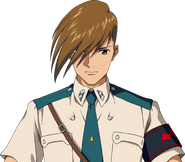