Following after the representatives for Neo America, Neo France, Neo China, and Neo Russia in the 13th Gundam Fight have been possessed by DG Cells from the JDG-00X Devil Gundam, Tris and her fellow Shuffle Alliance members descend to Earth, arriving just as Neo Japan's fighter, Domon Kasshu, has had his GF13-017NJ Shining Gundam's trademark move, the Shining Finger, overpowered by Master Asia and his GF13-001NHII Master Gundam with its version of the Shining Finger, Darkness Finger. Thanks to their arrival, Master Asia is forced to temporarily withdraw, taking the possessed Gundam fighters with him. Because Master Asia had turned against them and joined with the Devil Gundam, Tris, as Black Joker, serves as de facto leader of the Shuffle Alliance in Master Asia's stead since the wielder of the King of Hearts crest is the main leader of the group.

Tris' legacy is continued by Argo who, while surprised upon finding his new Black Joker crest on his hand, carried no guilt, remorse, or trauma from remembering the dark deeds he carried out while possessed by DG Cells. Despite that, he pledges his support as the new Black Joker to Domon to help stop the Devil Gundam, traveling to the Guyana Highlands to train for the finals in Neo Hong Kong, and battling Domon in the finals before agreeing to lend his support to stopping the Devil Gundam.

When Master Asia is finally bested in combat by Domon, the spirits of Tris and the other former Shuffle Alliance appear to congratulate him and how he has now earned his rest now that he knows his crest as the King of Hearts is in good hands with Domon now. 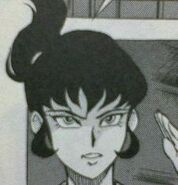