Beneath the surface, he is fanatically loyal to his friends. He dislikes hurting people, and suffers a great deal of guilt over the deaths he has caused. He also seems to have some difficulty recognizing, and dealing with, his own emotions. When Lady Une, who Treize has viewed as a pawn up until this point, is shot by Tsubarov, Treize is stunned by how strongly he reacts to it, realizing with a start that he may well have been in love with her all along. He experiences further difficulties when it comes to reconciling his personal feelings about war with his militaristic philosophy, which complicates his already complex life. 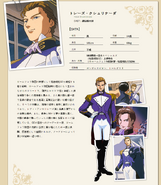 Retrieved from "https://gundam.fandom.com/wiki/Treize_Khushrenada?oldid=230267"
Community content is available under CC-BY-SA unless otherwise noted.