The Trans-Am System (or Trans-Am) is a feature of both the GN Drive and GN Drive Tau that temporarily increases the performance of the equipped mobile suits. The system is featured prominently in Mobile Suit Gundam 00. It also appears in the Gundam Build Fighters series and Gundam Build Divers, utilized by Gunpla based on GN Drive powered mobile suits.

The Trans-Am system was originally drafted by Aeolia Schenberg to grant Celestial Being's Gundam Meisters full utilization of their GN Drives and was a secret feature hidden inside the black boxes of the five original GN Drives. Because of this, the first and second generation Gundams never had the chance to utilize Trans-Am as the pilots didn't even know that such a powerful function existed; however, it was later possible for Fereshte since they were still in possession of a GN Drive when Trans-Am was enabled. The system itself was rigged to unlock by a system trap inside Veda that automatically executed itself once Aeolia was killed.

Under normal operation, a GN Drive generates particles at a preset rate while excess GN Particles are stored inside the GN Condensers. When Trans-Am is activated, GN Drive operates at a higher output and all of the compressed high-density GN Particles accumulated in the mobile suit are fully released, enhancing the machine's thrust and defensive capabilities as well as allowing it to perform at three times its normal output for a limited time.[1] The GN Particles surrounding and within the mobile suit also begin to glow red, making the entire machine appear reddish. Furthermore, afterimages are generated when the mobile suit executing Trans-Am is moving. It is said that a single Drive with Trans-Am activated is superior than three Drives that are not using the system.[2] One example that attests to this is Trans-Am Seravee Gundam being able to push the three-Drive Trilobite[2] in battle rather easily.

When it was originally unlocked in 2308, the Trans-Am System was usable by Celestial Being's Original GN Drives due to specific equipment that was only loaded onto them.[3] Because of this, it can be safely presumed that any of their GN particle-based machines or equipment cannot use the system unless it was linked to the GN Drive. This appears to have changed by 2312 however as equipment not linked to the GN Drive was seen to be able to enter or stay in Trans-Am even after the Drive is disengaged or without the Drive ever being connected.[4][5][6][7][8] One of the best observed examples of this is Cherudim's GN Shield Bits entering Trans-Am during the battle against Gadess despite not docking with Cherudim first[4] as well as later on during the final battle where the Ptolemaios 2 used the system despite not having GN Drives aboard.[7] 00 Gundam later was also capable of using Trans-Am even when it was only equipped with Large GN Condensers.[8][9] All these situations heavily suggest that Celestial Being reversed engineered the system from the Original GN Drives and integrated it into their mobile weapons and their equipment. Because one of the functions of the Trans-Am System is to increase particle generation rate of the GN Drive, a big disadvantage of not having a GN Drive equipped would be the lack of being able to harness this increased particle flow which would lead to decreased power or operation time.

While useful or even decisive when used at the proper time, Trans-Am comes with several drawbacks that makes it a "double-edged sword." Once activated, Trans-Am gradually drains the mobile suit of all its GN particles and once the unit's GN particle supply is depleted, the GN Drive must replenish the aforementioned GN particle supply in conjunction to a temporarily lower particle generation rate from the GN Drive. Until the particle supply is replaced, the unit will perform at a dramatically reduced capacity. This leaves a MS extremely vulnerable to any remaining opposition once Trans-Am ends. The activation time limit of Trans-Am is short and not fully known. However, the 00 Raiser is depicted to have a Trans-Am time limit of 3 minutes when not battling.[10] For reasons that are unclear, the system is usually forcibly deactivated if the mobile suit suffers some damage while using it,[11][12] however activating it while the mobile suit is damaged appears to be fine in most cases.[13][14] This seems to suggest that some amount of physical stress to the mobile suit while Trans-Am is in use would be enough to deactivate it but only if the damage is sustained while the system is in use.

While the system remained exclusive to Celestial Being for a while, it was later reverse-engineered and adapted by the Earth Sphere Federation and the Innovators. Performance-wise, the GN Drive Tau's Trans-Am was shown to be able to hold its own against an original GN Drive's Trans-Am. However, a large weakness of the GN Drive Tau's Trans-Am is that the drive destroys itself during/after usage,[15] essentially leaving the mobile suit without a GN Particle generator and reliant on reserve particles in order to escape.[15] While this is known to be the case for the 2312 Tau Drive models, it is unknown whether the problem was rectified later. Pushing the GN Drive Tau's Trans-Am System too hard also runs the risk of overloading the GN Drive Tau and potentially causing the suit to self-destruct,[16] though no situation observed so far has this happening without the pilot willingly using Trans-Am for that purpose.

According to Ian Vashti, Innovation is caused by the GN Particles' special state in Trans-Am.[21] He theorized that it may be possible that this special state of GN Particles can even be felt regardless of range, and that more possible genuine Innovators have awakened as a result of the Trans-Am Burst that Setsuna used during the final battle with the Innovators.[22] In addition, he is also worried that the Earth Sphere Federation will notice its relation to Innovation now that it possesses Trans-Am as well.[21]

The Trans-Am system was first revealed in 2308. This occurred after Alejandro Corner killed Aeolia Schenberg and activated a system trap inside Veda, which then unlock the system hidden inside the black boxes of the 5 original GN Drives. Trans-Am activated when GN-001 Gundam Exia was battling Ali al-Saachez and his GNW-002 Gundam Throne Zwei. The Exia's new abilities allowed it to clearly outclass the Zwei, forcing al-Saachez to flee.

In the four-year interim between the first season and the second, and during the events of 2312 AD, Billy Katagiri recovered and researched what Eifman was working on before his death concerning the GN Drives and their ability to utilize topological defects, which gave them a near-limitless energy supply. After much toiling, he was able to successfully replicate one feature: the Trans-Am system, first applied to Graham Aker's GNX-U02X Masurao, allowing him and it to fight on even footing with the GN-0000+GNR-010 00 Raiser. However, it had some serious drawbacks that is not present in the original GN Drive, as each usage destroys/seriously damages the GN Drive Tau[15][18] and forcing the pilot to rely on remaining GN particles in its GN Condenser for retreat.[15]

Unlike A-LAWS, the Innovators obtained their Trans-Am System by copying the data from the Ptolemaios 2's databanks via Anew Returner.[18] This system came to light separately from Billy Katagiri's version that is first used by the GNX-U02X Masurao.[23][24] This technology was applied to Revive Revival's GNZ-003 Gadessa, Hiling Care's GNZ-005 Garazzo, Ribbons Almark's CB-0000G/C Reborns Gundam and their GNZ-004 Gagas. After the Innovators' defeat, Billy studied the Gaga's system to fully understand the original Trans-Am System.[20]

By 2314, Trans-Am technology has been introduced to regular Federation forces to the point that it is considered standard equipment on the newest generation of GN Drive Tau machines. While it is still used for enhancing mobile suit performance when needed, Trans-Am is also used on GN Drive Tau equipped ships for extreme long distance journeys and as a last resort self-destruct as well. Whether any of the major flaws in using GN Drive Tau have been rectified remains unclear.

00 Qan[T] about to fire its GN Buster Rifle 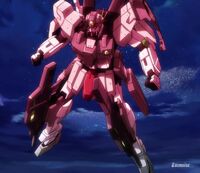