An MS platoon commander belonging to the Principality of Zeon's European Army, with the rank of second lieutenant. Although she is a woman, she has two men, Dell and Arth, under her command. Despite being a platoon leader, she prefers the older Zaku I to the Zaku II that her subordinates ride. While retreating towards the Lhasa base after the defeat in Odessa, they run out of food and enter the village of Kiki Rosita, unaware that it is a guerrilla village. Calmly assessing the situation they are in, they initially try to make a quiet supply run, but Arth's actions trigger a battle with the guerrillas. She and Dell attempt to escape, but Shiro Amada destroys the legs of her machine, making it impossible for her to get up. Shiro has no intention of continuing the battle any further, but the guerrilla villagers become a mob and try to attack the Zaku, and Topp, driven by fear, resists with the anti-personnel weapons equipped on the Zaku. In an attempt to inflict more damage on the suffering guerrillas, she was eventually killed by a direct hit to the cockpit by Shiro's anti-tank rocket. 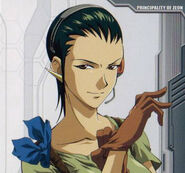