A former Earth Federation pilot who left the army in UC 0117 after a falling-out with his commanding officer, Baz Galemson. He later signs up with an Anaheim Electronics test team in UC 0122 and boards the Anaheim Electronics ship Bladewood, a refitted freighter, which was loaded with three test-type mobile suits, the RXF-91 Silhouette Gundam, the RGM-111 Hardygun, and the F71B G-Cannon Magna.

Tokio was assigned as the pilot of the RXF-91 Silhouette Gundam.

The mobile suits were taken to the Zebra Zone of Side 3, an area believed to inhabited, where tests were conducted on the three mobile suits' performance. The tests began in November of UC 0122. By February the tests were entering their final stages, but during a mock battle between the Silhouette Gundam and the Hardygun the two mobile suits encountered a Den'an Zon from the Crossbone Vanguard's Dark Tiger Squadron that were also conducting tests. Tokio in the Silhouette Gundam drove off the Den'an Zon.

Because the Crossbone Vanguard was not ready to reveal itself the Dark Tiger Squadron launched an attack against the Bladewood. Tokio launched in the Silhouette Gundam and engaged against two enemy mobile suits. During the attack Tokio released the Gundam's limiter and fought with its full potential, quickly destroying his targets before moving to aid his comrades.

Several days later, after the damaged Bladewood took refuge in an officially abandoned colony and was being repaired by the crew of the Earth Federation Forces Ra Cailum-class, the Ajax, the head mobile suit engineer, Iris Orlando, was brought aboard the Ajax to transfer the combat data from the RXF-91 Silhouette Gundam to the RX-99 Neo Gundam Unit 2 and adjust the new Gundam's controls.

Shortly after Tokio was piloting the Silhouette Gundam, along with Kevin in the Hardygun, in the colonies interior, returning from a meeting from the community with the Colony's refugees. On the way back to the Bladewood the Anaheim Electronics' mobile suits were intercepted by Earth Federation Jegans that ordered Tokio to rendezvous with the Ajax.

Because of the Ajax's Captain and mission, Tokio and Iris sought to escape, while helping several other Anaheim technicians escape. Tokio and Iris boarded the Neo Gundam Unit 2 while Layla Lagiorr, who was riding in the Hardygun as it busted through the Ajax's hull, boarded the Silhouette Gundam after she saw that it was abandoned, despite having only piloted a thirty year old AMS-119 Geara Doga before.

After activating the Silhouette Gundam, Layla saw the ship's captain Baz Galemson through the window to the ship's pilot ready room and recognized him as the man that massacred her people six years ago. She used the Silhouette to smash the window with the machine's fist but was stopped from further action by Tokio and Keven who convinced her it was more important to escape the Ajax.

Out in space the three mobile suits were intercepted by Galemson in the Neo Gundam Unit 1, whom Layla immediately engaged in melee combat with beam sabers and fists. However the battle was interrupted by Shelf Sheffield in the XM-07G Vigna Zirah, at that point Layla and the Silhouette escaped into the colony's interior with the Anaheim people. In the interior they were again intercepted by Galemson. This time Layla engaged him with the aid of Tokio in Unit 2. Tokio used Unit 2 to grab Unit 1 in a submission hold to keep it from moving, and then escaped in the core fighter. Layla used the Silhouette's beam sabers while Tokio used the core fighter's beam guns in a combined attack against Unit 1 that destroyed the mobile suit.

After the battle Tokio eventually retires from the Mobile Suit Develop Team and the Military and joins his friends Kevin Forrest and Iris Orlando as civilians. Layla Lagiorr has also decided to join them as well and happily greets Tokio after he returns from his resignation. Tokio than learns that Iris Orlando has a very interesting data disk in her possession. What happens after that for the group or whether Tokio ever notices the affection either woman shows him is unknown. 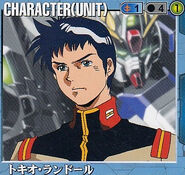 Add a photo to this gallery
Retrieved from "https://gundam.fandom.com/wiki/Tokio_Randall?oldid=445183"
Community content is available under CC-BY-SA unless otherwise noted.