A commander in the Orb Navy. He protected Shinn Asuka just after he lost his family during the Battle of Orb, and encouraged him to move to the PLANT.[1]

The Minerva's Ambush at Orb

Following the "Break The World" Incident, Orb's leadership were making plans to ally themselves with the Earth Alliance. When the ZAFT ship Minerva engaged the EA naval force just outside Orbs territory, the Orb navy was ordered to attack the Minerva, much to the displeasure of Todaka, who greatly disliked having to attack the ship that nearly sacrificed itself to save earth during the Junius Seven drop.[2]

When Kira, aboard Freedom, took Cagalli away from the wedding ceremony, he did not attack because he needed to be careful, but left Cagalli in the hands of Archangel and watched with respect as she went into hiding.[3]

Later, as commander of the Orb Black Sea Dispatch Force, he captained the aircraft carrier Takemikazuchi, and via Suez Base, fought the Minerva at the Battle of Dardanelles and the Battle of Crete, the later of which he went down with his ship when it was attacked by Shinn's Sword Impulse. At that time, he slammed Yuna Roma Seiran against the wall, and ordered his men to leave the ship just before it sunk. Like Shinn, Todaka did not know that the pilot of the enemy MS that was trying to sink his ship was the boy he had once protected.[4] 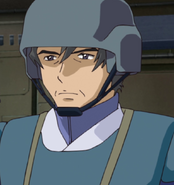 Todaka right before his death