The Titans (ティターンズ, Titānzu?) are the antagonists of the Mobile Suit Zeta Gundam anime TV series. They are also featured in Gundam Sentinel and Advance of Zeta: The Flag of Titans. Titans were an elite unit that the Earth Federation established in U.C. 0083 after the conclusion of Operation Stardust. Their original intention was to defend the Earth Federation against supporters of the Principality of Zeon, as well as to investigate Zeon sympathizers. However, they eventually turned rogue, allying themselves with Axis Zeon in order to fight against the Anti-Earth Union Group in an attempt to gain control over the Earth Sphere. They were all but wiped out by the AEUG at the end of the Gryps Conflict.

The Titans were an autonomous elite counter-insurgency group formed by the Federation Council in response to the events of Operation Stardust in 0083, where the Federation lost the large part of its fleet to a nuclear attack perpetrated by Zeon loyalists, with another successful colony-drop soon following shortly afterwards. Convinced of the legitimacy of the threat posed by Zeon remnants, the Federation decided to form an elite unit whose sole purpose would be to hunt down renegade citizens who either supported the Zeon and their cause or spoke out against the Federation government. Their first chronological appearance is Bask Om's speech at the end of the OVA.

The Titans were founded by Federation Senior Financial Officer Jamitov Hymen, who argued that the safety of the Federation displaced the civil rights of the citizens living under the Federation. In creating the Titans, he essentially created a special forces unit that had the ability to act outside the limit of Federation's supervision. As time passed, more people lined up to join the Titans, inspired by the group's success in repelling Anti-Federation movements. It should be noted, though, that this wasn't always the case - many Federation soldiers joined the Titans not because of the successes, but because the Titans power was growing and many didn't want to become irrelevant anymore, thus joining the Titans was the lesser of two evils. Regardless, the Titan ranks were largely made up of pro-Earthnoid soldiers, most of which harbored heavy anti-Spacenoid sentiments and were known for using muscle and intimidation tactics to enforce their rank, even against fellow Federal soldiers and lesser Titan officers.

As time went by this force became more and more powerful, and its objectives eventually expanded to include all who opposed the Earth Federation, and the citizens of the Federation started to resent it. On 31 July U.C. 0085, a massive protest was held in Side 1's 30 Bunch (the 30th Colony in Side 1's territory) against actions of Titans, but the protest soon turned into chaos, with riots breaking out throughout the colony. After repeated attempts by the Federation Forces to calm the riots failed, the Titans were dispatched to put it to an end. The Titans responded by shutting down the colony's air supply and using poison G3 Gas, killing the entire population of the colony.

When most Federation Council members refused to charge the Titans with any wrongdoing over the Colony 30 incident, dissident citizens and soldiers both on Earth and in space formed the Karaba and AEUG resistance movements, respectively. Initially, the Federation did not consider these movements to be of any considerable importance, but as the AEUG and Karaba's efforts to impede the Titans' forces increased, the Earth Federation eventually gave the Titans control of nearly all military operations, and most of the Federal army. Instead of resolving the issue, this only widened the conflict.

The Titans' cruelty and oppressive nature were eventually exposed when the AEUG captured the Federation capital building in Dakar during a televised assembly of Federation leaders. The Titans attempted to silence Char Aznable, who was making a passionate speech about humanity moving into space, before denouncing the Titans. Their actions and brutality were caught on camera, which was broadcasted to the entire Earth sphere, forcing the Earth Federation to publicly acknowledge the monsters they had ultimately created. With both public support and Federation opinion slipping from their hands, the Titans were effectively forced onto the offensive, which resulted in them ironically allying themselves with the recently-returned Axis forces, the very thing they were formed to oppose.

Towards the end of the Gryps Conflict, the AEUG successfully captured the Titans' Gryps Laser, which they used to wipe out the majority of the Titan fleet, with their leadership eventually lost in the ensuing three-way conflict between the AEUG, the Titans and Axis forces. Although most members of the Titans were killed or rejoined the main Federation forces, remnants unwilling to surrender regrouped into a rebel group called New Desides, but were eventually annihilated by the Earth Federation's Task Force Alpha in early U.C. 0088, as narrated in the photo-novel Gundam Sentinel.

Located at the Side 7 colonies, used in the secret development of mobile suits. Noah 2 (Gryps 2) was later converted into a colony laser by the Titans.

Space fortress formerly used by the Principality of Zeon. It became an important base of operations after the U.C. 0083 attack on the EFF naval review.

A mountain fortress used an alternative strategic base to Jaburo. Attacked shortly after the Dakar Speech by AEUG/Karaba coalition forces. Titans key member Jamitov Hymen fled moments before its fall. After losing this base, most of the Titans force moves to space.

Once known as the Zeon space fortress A Baoa Qu, it was renovated and recommissioned by the Titans. Destroyed in a collision with the asteroid Axis.

Uniforms of the Titans

As a result of being formed by the Earth Federation, a majority of the Titans uniforms are derived from the standard-issue fare that is used by the E.F.F. with some minor aesthetic changes. The Titans also have a uniform design of their own creation that implements some Zeon-inspired details. 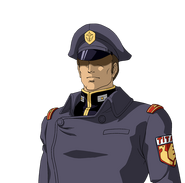 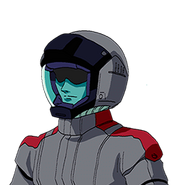 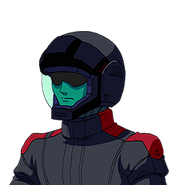 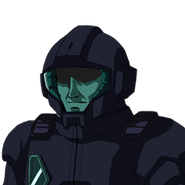 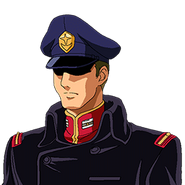 As with many other Gundam-based characters and groups, the Titans have appeared in other video game series, including Super Robot Wars and SD Gundam G Generation.

The Titans first appear in the Super Robot Wars series with Super Robot Wars 4. There, they attempt to discredit Londo Bell following the previous wars and the two groups finally come to blows after Londo Bell's branded as criminals. The heroes do come up on top, though.

They show up next in Super Robot Wars Alpha Gaiden, discrediting Londo Bell due to the events of the first game and causing them to disband. They later start attempting to collect powerful Super Robots to power the Aegis Shield, a powerful barrier that would protect either the Earth or the Colonies, with the Titans attempting to use them to just shield the Earth. The heroes fight back and decimate the Titans and are also able to use the Aegis Shield to protect both. The Titans appear in a much smaller capacity in Super Robot Wars Alpha 2, but by this time they're fully defeated.

The Titans form a branch called the Glory Star in Super Robot Wars Z. They are an elite unit piloting test prototype mechas called Virgora in which game protagonist Setsuko Ohara was once a member. They also have their own modified Titan uniform

Former Titan members also appear in Super Robot Wars V under a new branch called G Hound ranging from Jerid Messa who survives the events of Gryps Conflict along side Yazan Gable who rejoins the military and Buran Blutarch who survives being killed by Amuro and Kamille. Both Jerid and Yazan are playable characters only if the requirements are met.

Note that they do show up in other SRWs, but in those games, they follow their natural storyline and not a new telling.