The Gundam Wiki
Register
Don't have an account?
Sign In
Advertisement
in: Characters, After War characters, Female

Tiffa Adill (ティファ・アディール, Tifa Adīru?) is a fictional character from the After War Gundam X anime. She's Garrod Ran's girlfriend and often the target of all forces due to her Newtype abilities.

Initially, Tiffa was very introverted. She's quiet, shy, and reserved due to the horrible things she has experienced and due to her being a frequent target for kidnapping because of her special abilities. However, Garrod's feelings and support allows her to warm up with the Freeden crew as she begins to open up, and eventually falls in love with Garrod. She also had help from the Freeden's doctor, who often encouraged her to talk about her thoughts and express them through art. Although she has supernatural abilities, she has never considered herself a Newtype nor feel superior to anyone because of it.

While her newtype status is debated, she has several supernatural abilities: advanced precognition, hand-eye coordination, empathic, and limited telepathy. She is able to communicate with animals and understand their thoughts. While she can see the future, she only sees them in limited pictures. Tiffa is naturally talented in art and often draws to reveal her thoughts and visions.

Born after the end of the 7th Space War, she was taken by the Alternative Company to be studied, so that they could understand the power of Newtypes, and use their power to become the most powerful post-war corporation in the world. Tiffa was rescued by Jamil Neate, the captain of the Vulture land warship Freeden, and kept on the ship as it made its escape. As she stayed on the ship, Garrod Ran comes to rescue her as part of a mission given to him by men secretly working for the Alternative Company. Tiffa goes with him willingly, guiding him to an abandoned United Nations Earth factory, where a GX-9900 Gundam X was left, helping Garrod to access the powerful Satellite Cannon of the Gundam to defeat a number of Vultures going after the machine. Joining with the Freeden's crew, she assists in Jamil's search to find other Newtypes and protect them from being used in the way that he was during the war.

Tiffa expressions in Next Prologue

Tiffa in Next Prologue 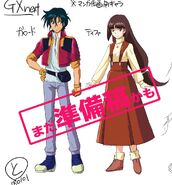 Garrod and Tiffa in Next Prologue 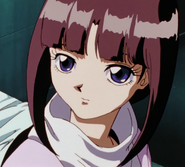 With Garrod in Pilot Suits