A combat coordinator and one of the Socius clones produced by the Earth Alliance. Just like the rest of the Socius clones, he cannot disobey or harm any Naturals due to the presence of a submissive gene in his genetic code. He is one of the few Socius clones not to be treated with the psyche destroying drugs. This is mostly likely because he has accumulated quite some experience in the military and has some results to his name. Furthermore, he is also a commander and using the drugs would render him useless. However, as the criticism about Three Socius starts to increase in the military, his superior is forced to reassign him to the Asian region. Three Socius pilots CAT1-XG1/12 Hyperion G Unit 1. 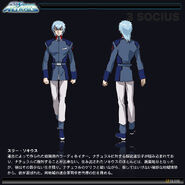 Retrieved from "https://gundam.fandom.com/wiki/Three_Socius?oldid=415744"
Community content is available under CC-BY-SA unless otherwise noted.