The Song of Truth

The Song of Truth (真実の歌, Shinjitsu no Uta)

The Song of Truth(真実の歌 Shinjitsu no Uta) is the Phase-46 of Mobile Suit Gundam SEED Destiny,it first aried in Japan on September 3, 2005 and in North America on February 22, 2008.

While gathering intelligence under the guise of a shopping trip at Copernicus City, Lacus receives a message from Meer, who is afraid of being killed. Though Athrun and Meyrin insists it is a trap, Lacus decides to meet Meer anyway. The would be assassins are killed, but Meer is mortally wounded.

Requiem’s relay stations have all been seized by ZAFT. Durandal puts on hold what to do with them and first gives the Minerva and the lunar fleet some time off for their hard work. Meanwhile, Meer was hiding in the lunar free city Copernicus. She learns that the Archangel is docked in the harbor and becomes nervous. If she acknowledges that Lacus exists, it means, for her, to deny her own existence. Meer’s new attendant Sarah, schemes to allure her to assassinate Lacus.

Kira, Athrun, Lacus, and Meyrin are out shopping secretly into town when they receive a SOS message from Meer. While knowing that it’s a trap, they go to the designated location anyway. The two divas face each other for the first time. Meer is happy to see Athrun alive, but she is terrified of Lacus who tries to help her. “I am Lacus!” shouts Meer, and Lacus gently admonishes her saying that nobody is able to be other than yourself. Then, Sarah fires at Lacus. Athrun saves her just in time, then jumps out and kills several gunmen. Receiving an emergency message, Neo arrives with Akatsuki Gundam. As Lacus is about to climb into Akatsuki’s hand, the dying Sarah tries to fire again. A gunshot echoes….and Meer falls to the ground. She took the bullet instead of Lacus. Meer tells Lacus she is sorry and dies. 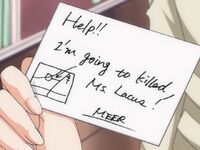 Special Edition/HD Remastered
Add a photo to this gallery

Retrieved from "https://gundam.fandom.com/wiki/The_Song_of_Truth?oldid=383760"
Community content is available under CC-BY-SA unless otherwise noted.