The Second Coming of Char

The Second Coming of Char

The Second Coming of Char (赤い彗星)

The Second Coming of Char (赤い彗星, Akai Suisei?, The Red Comet) is the second episode of Mobile Suit Gundam Unicorn.

The RX-0 Unicorn Gundam, now in Destroy Mode, overpowers the Kshatriya and Marida is ordered to retreat when Captain Zinnerman and his crew escape Industrial 7. The Unicorn transforms back to its original form with Banagher unconscious inside, and is picked up by the Londo Bell ship Nahel Argama.

On on board the Garencieres, Zinnerman is berated on the monitor by Lieutenant Angelo Sauper for failing to either retrieve Laplace's Box or rescue their Princess. Zinnerman admits that none of these developments could have been predicted and advises that they wait until they hear from the princess. Angelo takes offense to the suggestion, only for a masked man calling himself Full Frontal to interject. He is very interested about the Gundam Marida fought and orders Zinnerman to keep an eye on Federation movements.

In a flashback, young Banagher is hooked up to a machine while playing the piano. But the stress hurts him, causing him to play the wrong keys. He is then comforted by an unseen woman he calls his mother.

In the present, the Nahel Argama has taken refuge in a debris cluster. Their mobile suit squadron spots a derelict Salamis-class cruiser drifting above them. Meanwhile, Daguza Mackle, commander of an ECOAS unit on the ship, is told by one of the engineers that the Gundam, when transformed, responds to the pilot's thoughts, but the NT-D system can only be engaged for 5 minutes because of the stress of the system on the pilot. Before Mackle could inquire more about the NT-D, he is rudely interrupted by Anaheim Electronics representative Alberto Vist, who reminds Mackle that he was very clear that he must be present should he try to interrogate his staff. As Alberto floated about uncontrollable in the zero-G environment, Mackle changes the subject and calls Captain Midas over the comm, advising that they set a course for Luna II immediately. His reasoning is that the Gundam must be in some way related to Laplace's Box. Alberto agrees with him, but instead suggest that they head to a closer location: Anaheim HQ at Von Braun on the Moon. He and Mackle start arguing, to which Midas turns off the comm. He then starts complaining to his crew that ECOAS' autonomy and Alberto are starting bugging him; his first officer, Liam Borrinea, reminds him that complaining will not affect the situation. His subordinates then inform him that the derelict ship has decelerated. Midas orders them to sortie the mobile suits to move it. However, Borrinea reminds him that he already ordered the MS to return. Embarrassed in front of his own crew, Midas impulsively orders them to blast the ship with the main gun. Unfortunately, this exposes to their location to the Sleeves.

Elsewhere on the ship, Ensign Riddhe Marcenas approaches Audrey Burne and asks if she wants a peek at the Gundam. Takuya and Micott join in, just in time to see the Unicorn's hatch opened, revealing Banagher inside. Banagher is hurried to the infirmary, where he wakes up. Mackle then enters to interrogate him. Though everyone protests that he's hurt and needs treatment, Mackle could only see a civilian minor who hijacked a military MS and interfered in a combat situation; such charges warrant capital punishment. Banagher grudgingly tells Mackle everything he knew. The latter finds it unlikely that Cardeas Vist would just give the Gundam to a boy. Banagher repeats that Vist gave him the task to use the Gundam to protect everyone. As Mackle turned to leave, Banagher mutters under his breath that perhaps it would be better to believe that Vist is his father, which Mackle slightly hears. Then suddenly, the Sleeves launch an attack.

As the Nahel Argama scrambles to defend themselves, Audrey approaches Banagher and pleads with him to escape while she finds a way to destroy the Gundam, but Banagher refuses since she won't explain her reasons for doing so. Mackle enters and tells Audrey that "he knows who she is" and orders her to come with him, which she does willingly. On the bridge, Alberto enters to insist that they head to the Moon. He explains that they are facing the MSN-06S Sinanju, which was stolen by Neo Zeon two years ago. The Federation forces that were sent to get it back were completely wiped out. And the pilot responsible goes by the name of "Full Frontal", the leader of the Neo Zeon forces and described as "The Second Coming of Char Aznable". Borrinea backs up Alberto's story, having heard that Frontal took out two Clop-class ships singlehandedly. Midas finds it impossible, as Char went MIA in the Second Neo Zeon War. Alberto reminds them that regardless, the Sinanju is more powerful that any of the Nahel Argama's MS and they should start running. But a pragmatic Midas knows that if they do that, then they risk being attacked from behind. He orders the data on the Sinanju to be transferred to each section of the ship and the MS corp as well.

After destroying several Londo Bell mobile suits, the battle is halted when Mackle announces to Full Frontal that they have Audrey hostage on the ship, revealed to be Mineva Lao Zabi, the last surviving member of the Zabi family and Princess of the Principality of Zeon. Mackle demands safe passage for the ship, but Frontal refuses since Neo Zeon cannot confirm Audrey's true identity as Mineva, and instead orders them to turn over everything relating to Laplace's Box, including the Gundam - which is supposedly the key to Laplace's Box - or be destroyed in 3 minutes. Mackle initially suspects he is bluffing but Audrey reminds him that if the pilot is Char Aznable, then the Zabi family killed his family and he wouldn't care about her life. An observant Mackle sees this as confirmation that she is the princess; he had his comm open so the Sleeves could hear that. And he could guess that a number of Sleeve soldiers still believe in the Zabi family and losing her would be completely demoralizing. Mineva tells him that if he believes that, then he should continue his fruitless negotiation, but warns that Zeon won't be as merciful. She gives an analogy: Zeons would erase any trace of Laplace's Box. Alberto agrees with him and insists that they destroy the Unicorn's electronic system so that it won't open the box; Conroy Haagensen restrains Alberto, as the comm was still open and they didn't want the enemy to know that they are desperate. Mineva then encourages Mackle to pull the trigger; losing both the Unicorn and herself would deal a severe blow to Neo Zeon. Otherwise, they may as well wait until the Sleeves storm the ship and take the Gundam from them. But before Mackle could do so, Banagher then comes on the bridge and tries to get Mineva to leave to no avail. Mineva refuse to budge, fully admitting her true identity to him but Banagher stubbornly refuse to accept anything but her pseudonym. Mackle interjects, telling Banagher that he has place with adult matters, but Banagher rebuffs him by asking why so many people have to die over the box. Mackle explains that they are doing this so no one else has to die; Laplace's Box may hold the power to topple the Earth Federation. And if they were to hand it over to the Sleeves, then more lives will be lost; Mackle asks Banagher how will he explain to all those families that their loved ones had to die because he didn't know. After negotiations break down, Banagher enters the Gundam and engages Frontal in a battle to try and give the ship enough time to escape. With the aid of Federation pilot Riddhe Marcenas, both pilots are able to inflict minor damage to Frontal's machine but when Marida intervenes in her Kshatriya, Riddhe's ReZEL is disabled and Banagher passes out, allowing Frontal to easily capture the Unicorn. The Sleeves then withdraw, having gotten what they came for. Inside the Unicorn, the monitors turn blue and a La+ symbol is seen.

While at the colony, Banagher and Frontal discuss both the Gundam and the history of oppression. Banagher tells Frontal the same story that he told Mackle and Neo Zeon, and Frontal believes that the only reason Cardeas Vist would renege on the original agreement with the Sleeves is if Banagher was somehow related to Cardeas. Frontal's second-in-command, Angelo Sauper, roughs up Banagher while Frontal is polite, offering multiple times to shake the boy's hand and even takes off his mask at Banagher's request, revealing his face to be exactly like that of Char's. Banagher tells Frontal that killing people is unjustified, but Angelo calls him a hypocrite because Banagher inadvertently killed Ensign Sergei during the battle. Banagher realizes that he accidentally killed someone during his battle with Frontal and feels guilt over it. Frontal calls back Zinnerman and Cruz to take Banagher away. Before leaving, Banagher asks if Frontal truly is Char Aznable. Frontal tells him that he is a vessel, a vessel for the hopes of those in space and will become whatever the people of Zeon need him to be.

Meanwhile, the Nahel Argama receives new Jegans, Lotos, and the transformable Delta Plus to be piloted by Riddhe. Londo Bell joins two ECOAS teams together as they determine that the Unicorn is being held at Palau, a civilian asteroid colony belonging to Side 6. Alberto Vist tries to run the meeting, but is promptly shouted down by the ship's officers. Their bickering makes Capt. Midas leave the meeting to vent his frustration in an elevator over "a bunch of washed-up suits spouting desperate excuses to make for their complete and utter failure..." before he stumbles out. He runs into Liam and Mackle, who have been briefed on their orders from HQ and ask for instructions. Midas states that if the box is supposed to determine the fate of the world, then they have no choice. Mackle doesn't object but suggests that they treat the upcoming battle as a hostage rescue mission, as he feels that they owe Banagher, and he knows how they can pull this off; he subtly refers to the Nahel Argamas hyper mega-particle cannon. In the mansion, Frontal believes that they will need to evacuate Palau due to the Federation's movements. Londo Bell prepares to mount an assault on Palau to regain the Gundam while Mackle and the crew of the Nahel Argama come up with a plan to rescue Banagher as well. Riddhe, having had an earlier conversation with Audrey, knocks out her guard, gives her a space suit and tells her that he is taking her to Earth. After discussing the nature of battle and war with Marida, who is placed in charge of watching over Banagher, a disguised crew member from the Nahel Argama bumps into Banagher and passes him a map and a transmitter, telling him to get to the 14th Space Gate or risk being killed in the upcoming battle. Banagher laments over how the colony will soon become a battlefield. 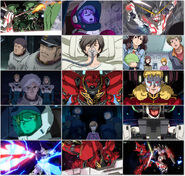