The Professor (プロフェッサー) is a character from the Mobile Suit Gundam SEED Astray manga series.

The Professor is a female Natural of unknown history and age. She is a close friend of Morgenroete's Erica Simmons. By the year CE 71 the Professor was a member of the Junk Guild, serving as the captain of the ship HOME and as an intermediary for her team and clients.

Later in CE 71 she connected the G.G. unit, which contained George Glenn's preserved brain, to the computer of the ReHOME essentially reviving George Glenn so that he could captain the ship, interacting with others via a holographic body.

When Lowe Guele and Kisato Yamabuki take the ReHOME to Mars, the Professor chose to remain behind and was put in charge of the administration center of the Junk Guild headquarters, Genesis Alpha.

After Genesis Alpha was destroyed and the ReHOME returned to the Earth Sphere the Professor moved back aboard the ship.

The Professor as seen on Gundam SEED Astray R

The Professor as seen on Gundam SEED Astray

The Professor as seen on Gundam SEED Destiny Astray 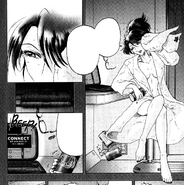 Retrieved from "https://gundam.fandom.com/wiki/The_Professor?oldid=454918"
Community content is available under CC-BY-SA unless otherwise noted.