Texan Dmitri(テキサン・ディミトリー) was a Federation Air Force pilot who flew for the Earth Federation during the One Year War. He appears in the Mobile Suit Variations series.

Nicknamed "Lady Killer", Texan initially piloted the mediocre Fly Manta before he was reassigned to the more versatile TIN Cod. During Operation Odessa, he received a medal for singlehandedly shooting down 34 enemy aircraft. By the end of the war, his personal tally consisted of 301 aircraft destroyed. After the war, his published autobiography entitled, Knight of the Sky, was a best-seller. 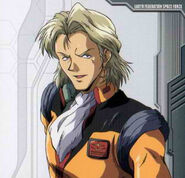