Tessa Tain is a fictional character from the After War Gundam X anime.

The leader of the National Liberation Front in a New United Nations Earth occupied area of the People's Republic of Estard, he tries to recruit Roybea Loy to join in their fight. When the Gundam pilot refuses, he tries to forcibly make the pilot join at gunpoint, only to be stopped by Yurina Sonohara. Finding out that the house is surrounded by New UNE soldiers, the group escapes out a back window, returning fire at the soldiers as they attack. 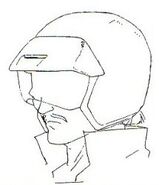 Retrieved from "https://gundam.fandom.com/wiki/Tessa_Tain?oldid=349807"
Community content is available under CC-BY-SA unless otherwise noted.