Tenneth was a high-ranking officer in the Earth Federation Space Force. An expert in long-range combat, his shooting skills were highly praised during the One Year War. He is the Federation's highest scoring ace, with a kill record of 149 mobile suits shot down and 3 ships destroyed during the war. Jung's record surpasses even Amuro Ray's, and because of this, he is rumored to be a Newtype. He is known to have faced-off against Zeon ace Breniff Oguz. 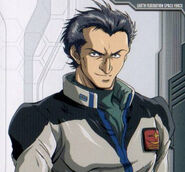