July 5, 2018 – Sunrise President & CEO Yasuo Miyakawa announced at Sunrise's Anime Expo panel on Thursday that Sunrise is collaborating with Legendary Pictures on a live-action Gundam film. The panel shared a teaser video and noted that "co-production has begun" and both Legendary and Sunrise are collaborating on the scenario. 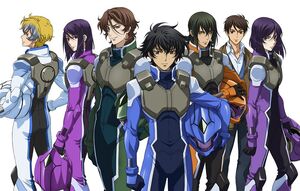 
April 2, 2018 – The "Gundam 00 Festival 10 Re:vision" event in Tokyo on Saturday announced that the Mobile Suit Gundam 00 anime is getting a new project. Seiji Mizushima, the director of the previous Gundam 00 anime, reported that he is working on it, and the main Ikebukuro branch of the Animate store chain reported that it will be a sequel. The event did not specify the medium of the sequel.

The event also announced a stage play adaptation that will debut in February 2019. The official website for the anime will reveal more information about the play this summer.

The announcement.
The prologue.